Are eagles nesting too early this year? 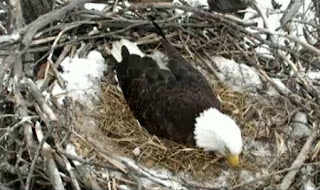 This is a still shot from the Minnesota DNR EagleCam, which is focused on a nest in Minneapolis.  As you can see, there is already an eagle incubating eggs -- according to the website, there are 3 of them, laid around January 1st.  You can also see that the nest was full of snow, which the eagles have covered with straw.

Given that the incubation period for a Bald Eagle is about 35 days, these eggs are long overdue to hatch -- if they ever do.  January is awfully early for nesting here in Minnesota -- even now the lakes are still frozen, so it would be hard for eagles to catch fish (one of their favorite foods).  They do eat carrion -- I have seen them on deer carcasses -- but would the chicks do OK on that?  And what about getting chilled?  Since those eggs were laid, it has gone below zero several times.  I'll be watching this nest to see what happens.

Eagles are not the only birds who might be mixed up by the crazy weather this year.  There was a pair of mourning doves that apparently never migrated from here because of the long, snowless, unusually warm fall.  Then it went to 20 below zero (F) one night and stayed below zero for several days.   I have not seen the doves since.  Did they freeze to death?  And today I could swear I heard a robin -- no worms for it to eat yet.  Maybe it will survive on frozen crab apples still on the trees.

If climate change deniers would pay more attention to nature, it would become obvious that something is happening.   A friend of mine in Pennsylvania said she has had pigeons breeding all winter, when normally they stop until spring.   I read recently that birds in Europe are arriving 2-3 weeks early, long before the insects that they normally feed on have emerged.  This certainly messes up the breeding season, since those birds evolved to feed their young on insects.

Back here in Minnesota, we are getting a wildly fluctuating freeze-thaw-freeze-thaw, while most of our snow is going south.  In spite of the fact that there's about a foot of the stuff in my yard, we are still technically in a drought, because there was so little rain last fall that the ground under that snow is very dry.  And frozen, so when the snow does melt, it is just going to run off.  According to the weatherman, this leaves us with the strange possibility of having drought and flooding at the same time.
Posted by Yonassan Gershom at 5:14 PM No comments:

I am referring to the hypocrisy of  the 36 Republican Senators who voted against federal aid for the victims of Hurricane Sandy,  yet previously voted for -- even demanded! -- similar aid for disasters in their own states. (See a list of who they are and what they previously voted for).  In Jewish numerology, the number 36 is "double life," but theirs was hardly a humanitarian decision.

To me this vote was the height of hypocrisy.  It makes me wonder why anybody would vote against helping their fellow Americans recover from the worst storm system to hit the East Coast since we have been recording the weather.  Was this in retaliation for New York City Mayor Bloomberg's support of Obama and acknowledgement that global warming is real?

If that sounds like some sort of paranoid conspiracy theory, consider the fact that in 2011 the Republicans on the House Energy Committee voted unanimously to deny the existence of climate change. This was part of a concerted campaign on the part of  the Tea Party to de-legitimize global warming in the minds of the public, starting right after Al Gore won the Nobel Prize for "An Inconvenient Truth." (Watch the PBS documentary "Climate of Doubt")  And they came close to succeeding -- until Hurricane Sandy hit and demonstrated what the scientists have been predicting all along:  Manhattan was going to end up under water.  Suddenly climate change seems very real after all.

This time the water receded, but if the polar ice caps continue to melt, the flooding of the Coast could  become permanent.  2012 marked a new low in the amount of polar ice since the advent of the satellite era (when we could observe the Earth from space.)  And no amount of denial is going to stop the big meltdown if we don't stop pouring CO2 into the atmosphere.

You can't vote science out of existence.  The universe is not a democracy, it simply is what it is.  Nature is no respecter of party politics.  Had we listened to the warnings that scientists have been sounding for decades, we might not be having these devastating (and very expensive!) super-storms now.  I have argued before that climate change -- not Obamacare or Medicare or whatever -- is the biggest threat to our economy.  Those who resist aid to storm victims are often the same people who have been trying to convince us that global warming is a hoax.  But nature does not listen to votes on congressional committees.  Nature just marches on.

It's not too late to begin changing our polluting ways, although turning the situation around is going to take a long time -- if it is even possible at this stage.  Meanwhile, the very least we can do is to help those who are in the path of the storms.

Shame on those 36 Republican Senators!