A beautiful pink and white spider!

"Even things you see as superfluous in this world -- like flies, fleas, and mosquitoes -- are part of the greater scheme of the creation of the world.  'And God saw all that God had created, and behold it was very good.'" (Midrash Exodus Rabbah 10:1)

For many people, including the words "beautiful" and "spider" together in the title of this blog post would be an oxymoron.  Spiders are often seen as ugly and even fearsome creatures.  But for those who can get beyond their arachnophobia, some spiders can indeed be attractive.  Consider this pretty spider I spotted on a milkweed plant in my garden. (Click photos to enlarge): 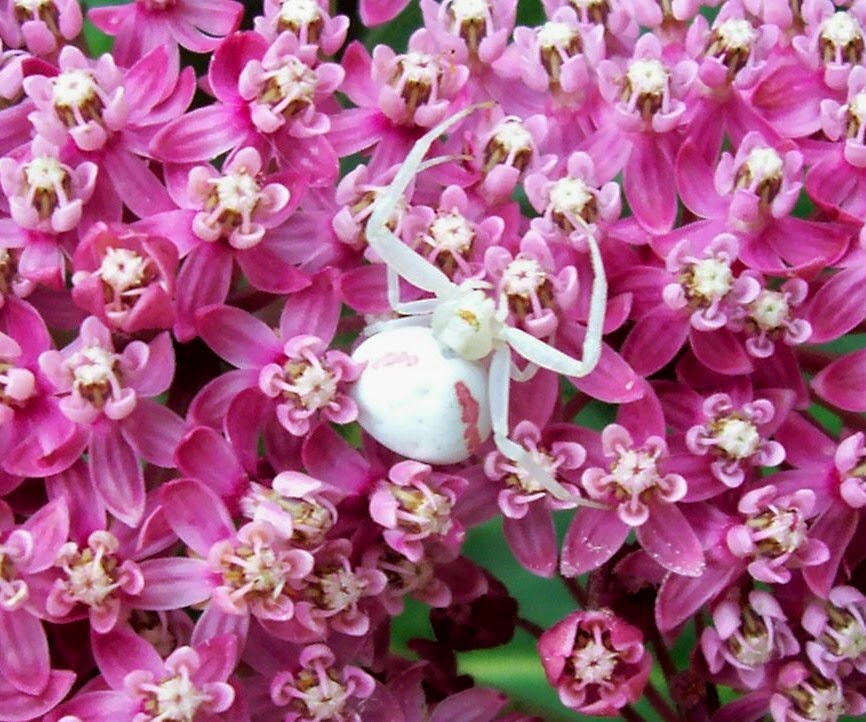 I had never seen a spider like this before, and was amazed at how the pink stripes on her (yes, it is a female) abdomen exactly match the color of the flowers.  I could not find this species in any of my nature books, so I googled "pink and white spider" and immediately found this page on a spider website that not only identified the species, it gave me a lot of other interesting info.  Turns out my pink and white spider is nothing rare.  The species is very widespread and often found on a variety of flowers. There were many, many more sites where people asked or wrote about this interesting spider.

The scientific name is Misumena vatia, and it a variety of crab spider, known as both a Milkweed Flower Crab Spider and a Yellow Goldenrod Crab Spider, among several other names.  This is one of the few North American spiders that can change its color to match its surroundings -- an arachnid chameleon!   After reading this, I remembered that I had seen similar spiders on goldenrod flowers, but they were yellow.  Now I know they are the same species. 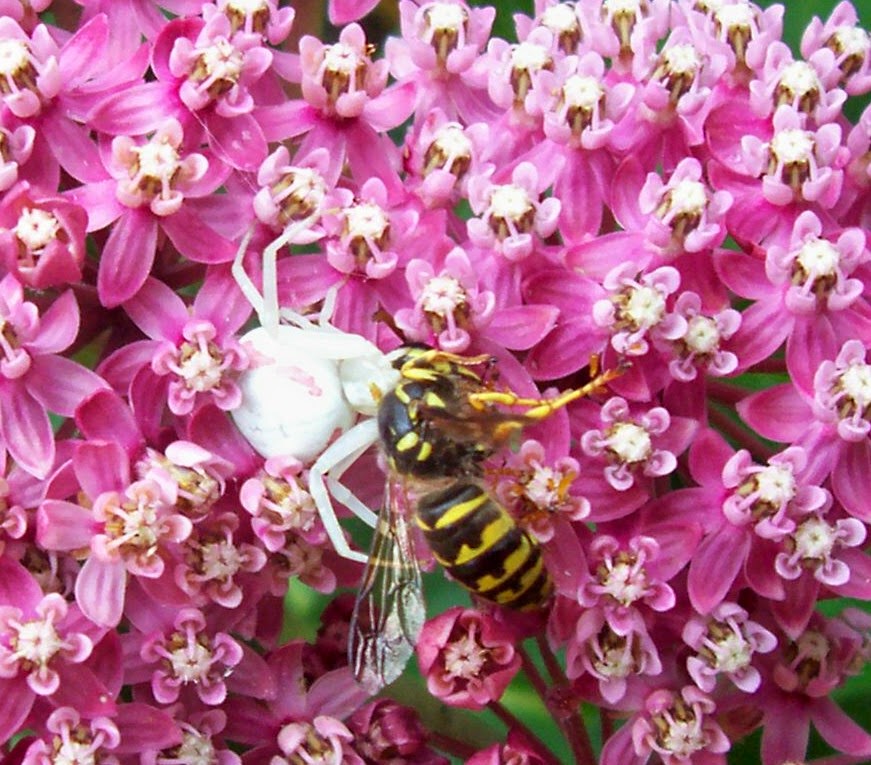 This is a "wait and pounce" type of spider that does not spin a web.  Instead, it sits quietly on flowers, blending in and waiting for something to land.  When I checked back a few hours later, the spider was still there and feeding on a yellow jacket wasp that she had caught.
﻿
Which brings me to another nature observation.  This summer, I have not seen a single honeybee anywhere on my land.  Not one!  As you may already know, the honeybees are facing a serious health crisis and are dying out by the droves.  Years ago I used to stand under my apple trees when they were in bloom and hear a constant, busy humming as the bees did their work.  But no more.  This year, the fruit trees were silent.

﻿
However, I am still getting pollenation on my flowers and vegetables.  The niche has been taken over by various other insects, including paper wasps, yellow jackets, hornets, flies,  moths, butterflies, and a variety of species of bumblebees.

This is why I do not remove wasp nests unless they are in a spot where they might be a problem for animals or humans -- such as right over a door way.  Otherwise, I leave them alone.  To those visitors who complain about wasps flying around, I reply that these are the insects responsible for pollenating the vegetables we harvest.  Plus they are insect predators, removing a lot of destructive caterpillars from the garden.  Really, the wasps and hornets are more beneficial that bothersome -- and if you don't bother them, they won't bother you.
Posted by Yonassan Gershom at 11:37 AM