In praise of dandelions! 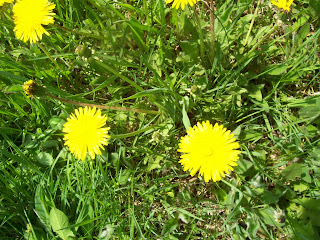 Why would I be praising dandelions?  Aren't they the bane of every homeowner with a lawn?  Yes, if you want to maintain a total monoculture in your yard.  But nature abhors monocultures, and will do everything she can to diversify them. Perhaps it is time for us to rethink the way we use the land around our homes.

Early-blooming flowers like dandelions are a major source of spring food for bees, butterflies, and other pollenators.  With the current bee shortage in many parts of the world, these insects need all the help they can get.  So I let the dandelions alone until they are done blooming, then mow them down. Sure, that spreads the seeds around -- but since I want dandelions, that's no problem for me.  After all, a "weed" is by definition simply a plant growing where you don't want it.

Granted, I live out in the country, where the philosophy pretty much is "if it's green, its a lawn."  In more controlled suburban neighborhoods you might have a hard time convincing your neighbors to let you have a lawn full of dandelions -- but then again, that's why I don't live there.  Nature is more important to me than social status.  If you visit me in the spring, you will likely be greeted with hundreds of these bright yellow flowers dotting the landscape.

Dandelions are also nutritious. In fact, they were brought to the USA as a vegetable by the French. ("Dandelion" comes from the French dent de leon, "Lion's Tooth," named or the jagged edges of the leaves.)  Old herbals prescribe them as a cure for scurvy, and recommend eating as many leaves as you can find in the spring.  Good advice at a time when people didn't understand about Vitamin C deficiency.  But they did know that the plants leafed out very early and the cure worked.

You need to pick dandelion greens before the plants flower, however.  Once the blooms appear, the whole plant gets very bitter -- so bitter, in fact, that I've known nature-oriented Jews to use them for the "bitter herbs" at the Passover Seder instead of the usual horseradish. (Which is perfectly kosher -- the Torah says "bitter herbs" but does not name a species.) 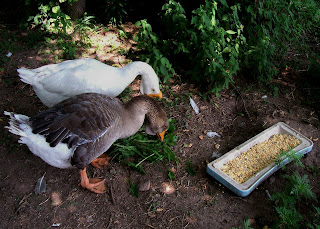 My chickens and geese also know the value of dandelions as food, and will choose them over other greens. Here you see two geese gobbling down fresh dandelion leaves, while ignoring the grain feed they've been eating all winter.  They know good nutrition when they see it!

Dandelions can also be used to make dandelion wine.  There are a lot of good recipes online, but one thing they may not tell you is to use the yellow petals only!!! The first time I tried it, I used whole dandelion heads and ended up with a bitter brew that only a masochist would care to drink.  That's because the green base of the flower (called the calyx) has the same bitter taste as the stems.  Having learned my lesson, I now use only petals.  The easiest way to prepare these is to hold the flower head in one hand and cut off the yellow ends of the petals with a scissors. A bit tedious, but you'll have a far better wine.

If nothing else, I find dandelions to be a welcome, happy greeting in spring after a long Minnesota winter.  Like little yellow smiley faces, telling me to come out of hibernation -- spring is here! 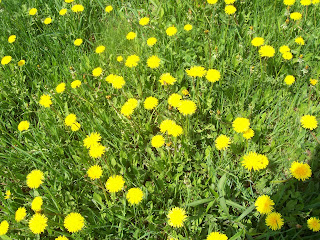