On Why I No Longer Do Speaking Engagements 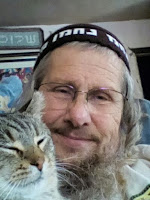 This is how I often introduce myself to a group nowadays, because I find that being upfront about my autism helps people get beyond my personal quirks.  Those of you who dislike labels should try being me without any kind of explanation.  Believe me, owning the label is much better.

Back in 1992, when my first book, Beyond the Ashes: Cases of Reincarnation from the Holocaust came out, I did not yet have a diagnosis.  Asperger's Syndrome (now considered a form of autism) wasn't even on the radar yet.  I was aware of my lifelong struggle with clumsy social skills, but nothing could have prepared me for the humiliating experiences I had on the speaking circuit.  Once the book came out, everybody and anybody wanted to meet the author -- and were deeply disappointed that a jabbering nerd like me was the guy who wrote it.

Within the Jewish community, I had functioned reasonably well, since we tend to be intense debaters who sway a lot and wave our hands around when we talk.  During worship we pace, shout, rock to our own inner rhythms -- what autistic people now call "stimming."  I have often joked that if  an uninformed person walked into an Orthodox study group, he or she might mistake it for a support group for autistic adults.  Which is probably another reason why my own autism went undiagnosed for so long.  In Jewish culture, rocking and swaying are considered normal.

And it was in a Jewish context that the book was written, where I was seen as a Jewish teacher talking about Jewish kabbalah.  Most of the reincarnation interviews were done one-on-one, which I'm good at.  Some people sent me written stories of their past-life memories, too, or copies of their past-life regression tapes.  Plus there were many phone interviews, also one-on-one.  From this material and my own academic research, the book Beyond the Ashes was born.

But when the book came out in 1992, everything changed  People read books in their own inner voice.  They form an idea of what the author is like, based on their own feelings and impressions.  This image becomes a sort of idol that they expect the author to live up to.  When it comes to spirituality, the New Age image is one of a calm mellow, laid-back personality, a sort of guru sitting cross-legged on a pillow, chanting "Om."  Google "spirituality images" and you get this: 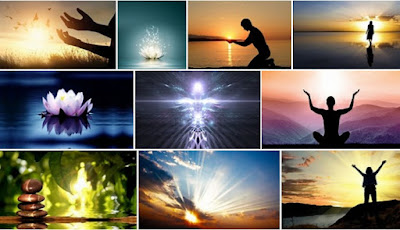 An image that I do not fit at all.  Not one photo in there of Orthodox Jews dancing, swaying, rocking back and forth in ecstasy.  Which is why I was mostly a one-gig speaker.  A guy who disappointed his audience and was rarely invited back.

At one workshop, a participant flat out told me that if he had known I was a "typical New York Jew," he would never have signed up.  (I am not from New York. And yes, I do see the antisemitism in this attitude, but that's a whole other story.)  At another workshop, my bluntness was seen as insensitivity.  In Germany, where my book had just been translated, my mannerisms were mistaken for nervousness.  As for the written feedback forms...  I could go on and on, but you get the point.

There were times when I regretted writing Beyond the Ashes, this book that took over my life and typecast me so completely that nobody wanted to hear about anything else.  Yes, it helped many people, but it also left me tired and drained.  I came to understand why Leonard Nimoy wrote I Am Not Spock after the original Star Trek series ended.  I began to see myself as something separate from the "Rabbi Gershom" who wrote about Holocaust reincarnations.  He became a role I was playing -- not very healthy, to be sure.  I was disassociating from myself as author of the book.

The final straw came in the late 1990s, when I was castigated in front of the audience by a program organizer for not being "spiritual enough," and for going "off topic" on a question that didn't have to do with reincarnation per se, but which was relevant to explaining the Jewish worldview.   He actually said, "This is not what we hired you to talk about."  All they wanted to hear was Holocaust reincarnation stories, without much Jewish context. I came home from that gig emotionally drained and vowing never to do that again.  Dayenu!  Enough already!

The diagnosis changes everything...

It was during the 1990s, in the middle of all this chaos, at the age of 45, that I was diagnosed, first with ADHD, and later Asperger's (which I now believe can overlap each other.)  Suddenly a light went on in my head.  Things began falling into place.  I went online and read everything I could find on autism, joined numerous discussion groups and began putting my life back together.   Had I known more about my autism during those years on the speaking circuit, had I been able to give a name to the mannerisms that the audience found so uncomfortable, things might have gone differently.  Heck, if I had known about it in childhood, my whole life might have been different.  But that is, as they say, water under the bridge.

In the year 2000, as my millennium resolution, I pulled out of the spirituality workshop circuit altogether.  I had given 20+ years of my life to this
topic and it was time to move on.  There were now plenty of therapists and psychiatrists who were getting paid way more than me to do this Holocaust reincarnation stuff.  So let them have it. My book opened the door. Others walked through.  My role was over. And I was, quite frankly, tired of being typecast as “The Holocaust reincarnation rabbi.” I was tired of getting calls in the middle of the night from people who wanted free counseling and did not bother to check time zones. It was time to pass the torch to the next generation and begin a new chapter in my own life. So I did.

What is "spirituality" anyway?

The Oxford English Dictionary defines "spirituality as "The quality of being concerned with the human spirit or soul as opposed to material or physical things."  There is nothing in that sentence about body language, eye contact, voice inflections -- all of which are, after all, the very "physical things" that spirituality is supposed to leave behind.  So why judge me for not fitting into the New Age stereotype?

Nevertheless, that's what happened.  It traumatized me to the point that I no longer want to do workshops and have pretty much become a recluse, living with my wife and my animals in northern Minnesota.  What I have to say, I communicate through my writing.  It was, after all, a book that originally started all this, and, if I may say so myself, I'm a darned good writer.  Let people read in their own inner voice, without the distraction of my autistic personality.  Maybe in that way, I can get something of my true spirituality across.

There are probably readers out there now thinking to themselves, "Well, he can't be much of a spiritual guide if he can't even handle a little criticism."  First of all, I never claimed to be some sort of guru.  And second of all, there is no reason I should have to put up with emotional abuse.  Constructive criticism of my work I can take, but all this personal rejection did very little for my self-esteem.  If anyone is being "unspiritual," it's those people who insist on projecting their own expectations on me.

Today, I find myself wondering how many other autistic people have been rejected because of New Age stereotypes about what it means to be spiritual. We are frequently misread as "having no empathy" or being "unable to love" because we don't look people in the eye or enjoy being spontaneously hugged.  Many of us are unable to sit still without fidgeting, which pretty much rules out Zen meditation.  I was also seen as "unsocial" at all those speaking events because I didn't hang around the hotel bar to chitchat afterward.  After the intensity of doing a speech and/or leading a workshop, I need solitude to recharge.  The last thing I need is to be surrounded by the audio-visual chaos of a party.

I  puzzled for years over why God would have chosen me to be the person to write Beyond the Ashes.   I finally came to the conclusion that God did not want this thing to turn into a cult.  So he chose an autistic nerd with zero charisma, a guy with a memory for details who could put it all together with a certain amount of emotional detachment, but not become a cult leader.  The Aspie tendency to hyper-focus on one topic at the exclusion of all other interests served me well in making Beyond the Ashes a useful book that remained in print for 18 years.

Not many people get to "write the book" on a topic.  I did exactly that, not only opening the door to talk about Holocaust reincarnations, but also, as so many people have told me, opening up Jewish spirituality.  At the time Beyond the Ashes first came out, there was very little available in English about Jewish reincarnation teachings. This made it a groundbreaking work in the spirituality field. The book has had a profound and positive effect on how people in the New Age and past-life therapy communities are now interpreting the “karma” of the Holocaust.  Today it is a classic.

Yes, I can see the irony in that.  "Autistic nerd writes major book on spirituality."  If I were a true New Ager, I would claim that I channeled it, that some other entity besides Yonassan Gershom is the true author.  But I know differently.  The book happened precisely because of my autism, which provided a perfect storm of just the right abilities at just the right time.  That is my genius.