"Thanksgivukkah" is the term coined for a very rare event happening on November 28, 2013:  This year, the first day of Hanukkah falls on the American holiday of Thanksgiving.  It won't happen again for another 70,000 years, so enjoy it now while you can!  (Plus the date also converges with a spectacular comet -- more on that below.)

The Jewish community is certainly having a good time with it.   Search the Internet and you will find all kinds of Thanksgivukkah shirts, mugs, postcards, and other chochkes, as well as announcements of community celebrations.  (To see a gallery of shirt designs, click here.)  The Times of Israel has a nice roundup page of links, including songs and the story of a boy who designed a "menurkey" -- that's a Hanukkah menorah in the shape of a turkey.

One of my favorite images is this shirt by ModernTribe.com, featuring a Woodstock-inspired theme with "8 Days of Light, Liberty, Latkes."  Pretty clever!

Hanukkah really is about freedom, when the Jews rose up against the Greeks and re-dedicated the Jerusalem Temple to God.  Hanukkah may well be the first recorded war fought for religious freedom.  But this freedom theme also raises the issue of how "free" the Thanksgivukkah turkeys really are.  Can we eat turkey at a freedom fest when the birds themselves are not really free?

Unlike the colorful wild turkeys usually portrayed in Thanksgiving art, the turkeys you buy in the grocery store are factory-farmed white birds that have been bred to be so heavy they cannot even mate naturally, let alone fly up into trees or run through autumn fields like their wild ancestors.  Most of them probably never even see the outdoors at all, because they are raised in big, overcrowded barns. 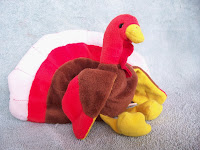 As a vegetarian, I would urge you to consider not having a turkey for Thanksgivukkah.  In fact, it was at Thanksgiving time many years ago that my wife and I finally decided to go veg.  We had been eating very little meat anyway, and as the holiday rolled around, we asked ourselves:  Do we really want a turkey this year?  The answer was no, and has been no ever since.   The only turkey on our table will be this toy bird.

As for the holiday menu, there are plenty of delicious vegetarian foods you can serve -- and combining with Hanukkah this year makes for some creative recipes.  The Jewish Community Center of St. Paul, MN, sent out a recipe for squash latkes (instead of potatoes) along with their recent fundraiser.  I plan to try that one!

When you think about it, turkey was not the only traditional food that Native people brought to our tables.  Corn, squash, pumpkins, potatoes, tomatoes, beans, wild rice, maple sugar, cranberries, blueberries, and chili peppers are some of the foods that are native to North and South America.  So let's make this a real Festival of Freedom and let the turkeys live!


Now for the comet: November 28, 2013 is also the date that Comet Ison -- which could be the "Comet of the Century" -- will pass around the sun.  As of this writing, it is now visible to the naked eye in the dark sky, and is expected to grow brighter in the next few days.  In centuries past, such a convergence between two calendars and a comet would have been seen as an omen, for good or bad depending on the culture.  To me, it is just an interesting phenomenon.

There are 3 possibilities for what will happen to Ison in the next week or so:  1) it could burn up in the sun's corona and disappear; 2) it might break up into a bunch of glowing pieces; or 3) it may remain intact and come out from behind the sun glowing very brightly.  For more on Ison's perilous journey, visit this page on the NASA site.
Posted by Yonassan Gershom at 2:14 PM 4 comments: