The Sukkot Super-moon eclipse of 2015 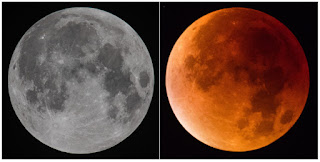 The first night of Sukkot (Feast of Booths) always falls on the full moon of the Hebrew month of Tishri.  This year it was not only a full moon, it was a super-moon, because the moon's orbit brought it closer to Earth than usual.  But even more special, it was also a total eclipse where I live.  All of which made this a Sukkot night to remember.

My wife Caryl and I began eating in the Sukkah around 7:30, when the eclipse was just beginning.  We could see the moon through the natural branches on the Sukkah roof, but after the meal we decided to move our chairs outside for a better view.  The sky was not perfectly clear.  There were clouds moving across the sky, which sometimes obscured the moon.  Each time it appeared through a hole in the clouds, it looked a bit different as the eclipse progressed.  This added to the mystique, I think.

The night itself was perfect.  Not too cold, yet cool enough to be comfortable.  One interesting thing we noticed was that during totality, there were no mosquitoes.  Do they become less active in total darkness?  Normally the bugs are most active at dawn and dusk in the twilight.  As the eclipse came out of totality, there were again a few mosquitoes buzzing around us.  An interesting phenomenon.

Sitting there together under the eclipse light was a romantic experience for Caryl and me, and we began talking about how long it had been since we had simply sat together in quiet sharing.  Watching the eclipse became a calm, gentle meditation for both of us.

We stayed outside the whole 3.5+ hours it lasted here in Sandstone, MN.  We could not take any photos because that is forbidden on a Jewish holy day, but the beautiful images of the experience are forever saved in our hearts.
Posted by Yonassan Gershom at 11:39 AM 1 comment: