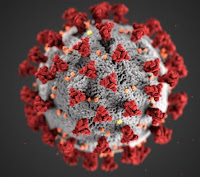 As readers of this blog know, I oppose using chickens for the  kapporos ritual, and have been outspoken on this issue for years. But I also oppose using antisemitic tropes to get publicity in the fight against it.

This year, the Alliance to End Chickens as Kaporos has sunk to a new low.  They have re-opened a lawsuit from 2018 opposing the ritual, now linking it to COVID19.

When I first heard about this, I assumed they were referring to social distancing and the danger of gathering in large crowds.  A concern I would agree with. But the Alliance takes it a step further, evoking, however unintentionally, an old trope about Jews being the source of plagues and diseases. This I must condemn as tone-deaf and dangerous.

In their lawsuit, they compare pop-up kapporos centers to "wet markets" in Wuhan, China, where it is believed COVID19 mutated, and implying the same thing can happen with Hasidic Jews slaughtering chickens in New York.

This theme been picked up by animal rights groups all over the internet, resulting in posts like this tweet: 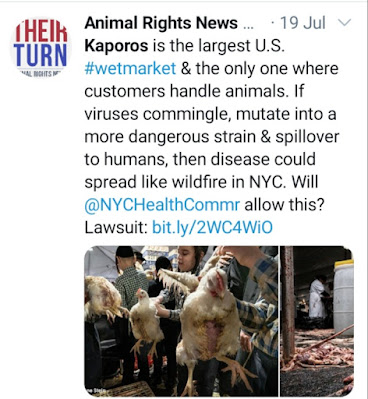 The implication here, as I read this post, is that COVID19 will jump from humans to chickens, mutate there, then jump back to humans in a more virulent form and wipe out New York City.  Not only is this an irresponsible, inflammatory scare tactic, it is scientifically impossible. Chickens do not get COVID19. The pop-up kapporos centers may be messy and cruel, but they are not incubators for a new form of coronavirus.  (Chickens can, however, give you a case of salmonella, which is why the CDC recommends not kissing or snuggling them.)

COVID19 is a mammalian virus, believed to have originated in wild bats that were being sold as food.  Isolated cases have been reported of cats and dogs getting COVID19 from humans, including a tiger in Central Park Zoo, but birds, including chickens, cannot carry or transmit it.

The Chinese in Wuhan might eat bats, but Hasidic Jews do not, nor do they eat other kinds of wild "bush meat."  The chickens used at kaporos centers come from the very same commercial sources as the chicken sold in your local grocery.  Unless you are a vegetarian, you probably have some in your freezer.

There is a very big difference between handling domestic species that humans have interacted with for centuries, and "wet markets" selling wild-captured exotic species with possible viruses against which humans have no resistance.

Nevertheless, the animal rights groups are now using #wetmarket in their Tweets and posts, purposely causing kapporos to turn up in searches about COVID19 and primitive meat markets in Wuhan and elsewhere.  Making such a comparison at this point in time, when people are already panicked and angry, is bound to have negative consequences. Especially since the people involved are Jews, a group that has been falsely accused of spreading diseases in the past. 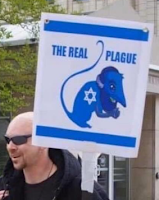 There are already antisemitic memes online, linking Jews with plagues, like this sign seen at a recent white supremacist protest. Conspiracy theories blame George Soros,  the Jewish billionaire who is everybody's scapegoat. QAnon claims the Democrats worship Satan, another accusation sometimes leveled at Jews. Adding fuel to this fire is a bad idea.

Rina Deich, a founding member of the Alliance, has tried to assure me in a text conversation that their intent was not to say that COVID19 will mutate in chickens. Rather, they are referring to crowds of people gathering in the unsanitary conditions, where some sort of new mutation of viruses in chickens might happen. In her words to me:

"There is a toxicologist who has spent hours with the lawyer discussing the potential dangers of kaporos, especially the way it is practiced. Just because it hasn't happened yet does not mean that in the right conditions it wouldn't happen. It's a distinct possibility."

Just because it hasn't happened doesn't mean it can't?  I suppose that is true of just about anything.  Hard to disprove a negative, they say.

But even if this unnamed toxicologist is right, and some other virus in chickens could mutate, linking kapporos and COVID19 in a publicity stunt right now is still irresponsible. And publicity stunt it is. The first thing the Alliance did was send out a press release. Whatever their original intent, it has now gone viral.  And not everybody is making fine distinctions between Wuhan bush meat and chickens in New York.  Just read the headlines.

Deich tried to reassure me that, "When we are interviewed by the media, if we handle it the correct way, it should not fuel anti-semitism. In fact, people seeing that Jews are opposed to this practice takes away their ammunition."

Brave words. And if Deich does the interviews, it might well be true, although I doubt whether antisemites will care if Jews protest it or not.  However, if Karen Davis, their primary spokesperson, is the one giving those interviews, I do not trust it will be handled "in the correct way."  She has a bad record for saying insensitive things about Hasidic Jews, a culture she does not like or respect. (Read more on that.)

As of this writing, it is not even clear if the judge will re-open the case, which was denied back in 2018. But that doesn't really matter, because the Alliance already got what they wanted: lots of free publicity.  They have also set the stage, come October, for the public to see Orthodox Jews as a bunch of dangerous, disease-ridden people spreading the Plague.  They didn't intend it that way, but there are always unintended consequences.  I only hope it does not result in violence against the community like it did in the past, heaven forbid, when Jews were burned at the stake for supposedly causing the Black Plague.

As I said at the beginning of this article,  I oppose the use of chickens in this ritual. I would love to see it shut down forever.  I encourage my fellow Hasidim to avoid these gatherings, not because of chickens who don't carry COVID19, but because of people who do. At the same time, I cannot, and will not, endorse this latest mutation of the anti-kapporos campaign.

Posted by Yonassan Gershom at 10:39 AM 2 comments: