You can't fast forward a sunset ~ and other TIME-ly thoughts

A while back I was teaching a circle dance to some children and told them to go clockwise.  They looked at me blankly and had no idea what I was talking about.  Their generation is used to digital clocks -- which do not go in circles at all -- and that got me to thinking about how we experience time.   "Clockwise" comes from the way that the shadow moves on a sundial.   Later, this was carried over onto the faces of mechanical clocks.  In both cases, time is seen as a continuous, cyclical flow.

An hourglass, on the other hand, is not cyclical. It has a beginning and an end. But it still shows a flow of time, as the grains of sand slowly run down. A digital clock, however, shows time as broken up into a bunch of individual numbered moments that are often disconnected from each other.  All of this may seem like a bunch of nitpicking, but I wonder how it affects the way we see the natural world.   Nature goes in cycles. Days, months, years-- all are based on the somewhat circular patterns of rotations and orbits. Even the elliptical orbits of comets go in cycles.  And they all move at their own pace. But are we losing that sense of the "flow" of time? 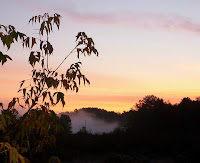 So last week I was watching a program on PBS about how families are spending less and less time outdoors, and how this, combined with the high speed of modern technology, is indeed distorting our inner sense of time.  "You can't fast forward a sunset," one of the panelists said, and that statement has stuck with me. In a world where you can speed up, slow down, or freeze-frame a movie, or watch it over and over anytime you want to, the slow steady pace of nature  often seems boring. So kids prefer to stay indoors and play speedy video games instead.

Yet it is precisely that slowness that allows us to relax and tune in to God's creation.    Being with nature is a form of meditation. Our bodies evolved in nature, the Garden of Eden was in nature -- however you define it, we need the natural pace of with nature.  But nowadays, even meditation is speeded up -- or at least people try to shortcut it. They go to a weekend seminar to get "enlightened" and are disappointed it it doesn't "work" right away.   But true enlightenment is a lifelong process that takes hours and hours of quiet contemplation.  You can't get there by plunking down your money for a workshop and no, there isn't an app for it, either.

The only way you can freeze-frame a sunset - or any event in nature - is to take a picture of it. Even then, you only have a small part of the real experience.﻿  In photographing sunrises (which I seem to do more than sunsets lately), I have found that there is always a perfect moment where everything in the picture is just right.  The minutes before and after that are beautiful, too, but that peak moment is the best picture in the series.  However, in order to capture that moment, I have to patiently sit there for about 45 minutes or more, because the sunrise is going to unfold at its own pace, and there's not a darned thing I can do about it. It's happening on God's time, not mine.

Watching a sunrise is a "letting go" experience that requires us to fit into nature's pace, not the other way around. Only when you are willing to just sit there quietly and absorb the experience are you able to notice the subtle changes from second to second and minute to minute. There's that magical moment about an hour before dawn,  when the first bird begins to sing, when the rooster begins to crow and the wild geese begin to honk. In Jewish law, the earliest time you can say the Shema prayer is when you can distinguish a blue thread from a white one.  Try it at dawn sometime.
﻿﻿
Posted by Yonassan Gershom at 11:43 AM 3 comments: