In Memory of "Big Bird," my pet rooster

I am sad to report that Big Bird, the ten-pound yellowish-white rooster who appeared with me on posters and the cover of my latest book, has crossed the Rainbow Bridge.  He was the victim of a predator attack, probably coyotes, that also took the lives of two other chickens and a guinea fowl.  They will all be very much missed.

Big Bird was going on 11 years old -- a very long life for a chicken -- and was spending a lot of time in a cage anyway, because he could no longer fly up to the roost at night.   But he still loved going outside with the other birds on nice days.  So I let him take the risk and enjoy a more natural life as a free-range chicken.  At dusk he would come back to the coop, where I would put him in his cage for the night.  Last night he did not return, and stayed outside somewhere, along with a few chickens and two guineas who had taken to roosting outside instead of inside the building.  I looked for him but could not find him in the dark.  This morning I found the carnage, including the destroyed nest of a barred hen named Rockette who had been secretly incubating in the bushes.  I knew she was broody by her behavior when she came it to eat, but had been unable to find her well-hidden nest.  Last night the coyotes obviously did.

It is always very sad when this happens.  Nature is not Disneyland, and in the real world animals do attack and eat each other.  That's the reality of that "circle of life" that everyone is romanticizing lately.  Life is not a cartoon, and finding piles of feathers and other remains in the yard is not pretty.  I feel terrible when I lose a bird to predators, but at the same time, I still feel they would rather run free than be caged all the time.

I suppose it's a lot like letting your children run free instead of "helicoptering" them everywhere.  Yes there are dangers and risks, but there are also the joys of freedom and exploration.  I feel sorry for many of today's kids who don't have the "free range" experience I had back in the 1950s, when I rode my bike all over town and played for hours alone in the woods.  That experience shaped my love of nature and helped make me the writer that I am today.  Nowadays, parents are being arrested in some cities for letting their kids walk a couple blocks alone to the park.
(See freerangekids.com for actual cases of these ridiculous ordinances.) 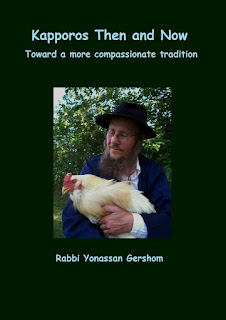 A different pose from the same photo shoot (My wife Caryl was the photographer that day) now immortalizes Big Bird on the cover of  my latest book, Kapporos Then and Now: Toward a More Compassionate Tradition,   In this book, I present the issue from both sides (practitioners and protesters), explaining why the vegan" meat is murder" argument does not work, and presenting other, more effective reasons for using money instead of chickens.

The best memorial  you could give to Big Bird is to buy a copy and educate yourself about the Kapporos controversy, then pass a copy on to your local Orthodox or Hasidic rabbi.  In this way, Big Bird will continue to help his fellow chickens live to lead longer, happier lives.
Posted by Yonassan Gershom at 3:34 PM 5 comments: