OY VEY! All this milkweed and NO MONARCHS! 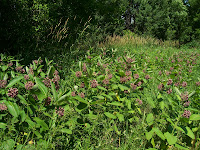 For the past 16 years I have been allowing Common Milkweed to naturalize on my land for the Monarchs butterflies. This is just one of several big patches that I maintain.  (I am now in the process of certifying my land as a Monarch Way Station through Monarch Watch.)

Normally I could walk out there and within minutes find the whole life cycle of the Monarch butterflies.  This year: zero-zilch-nada.  I found only THREE EGGS, which I brought in to raise for my grandson to watch.  Only one hatched.  It is now a pupa.  The question is, when it emerges as a butterfly, will it be able to find a mate?

As for adult butterflies, I've only seen one Monarch all summer.  Other species are scarce, too.   Normally this field would be teeming with all kinds of butterflies, as well as bees and other insects.  This year there are very few.   According to a March 18, 2013 article on the National Geographic News site, this year has hit an all-time low for Monarch populations.

The most common butterflies on my land this summer seems to be the skippers and  fritillaries, but even those are few and far between.   I saw on the news that we have lost a whole generation of Monarchs down around Texas, due to bad weather.  Parts of the country were so cold this spring that there was no milkweed for the Monarchs to breed on when they arrived.  Here we had rain every day for a month, followed by an unseasonal heat wave.  Now it is chilly again, breaking record lows all over the state.   Yes indeed, global weirding is a reality!

We have also lost a lot of Monarchs over the years due to loss of habitat.  Monarchs migrate north in stages --as many as four generations per summer -- and if one of those generations can't find milkweed to breed on, well, you end up with no butterflies going further north.  Like this year (sigh).  As I always do in all my Monarch reports, I strongly encourage everyone to save a space in their landscaping for some milkweeds to feed the Monarchs.  If you don't want Common Milkweed (which spreads by underground runners that can be invasive in small spaces), then try one of the many other kinds.  The so-called Butterfly Flower (formerly "Butterfly Weed") comes in a variety of colors that will fit any garden.  And it stays put in a pretty clump.

"When you reap the harvest of your land, do not reap to the very edges of your field or gather the gleanings of your harvest.   Leave them for the poor and for the foreigner residing among you. I am the LORD your God."

Of course, this originally referred to the human poor gleaning the fields for leftover crops.  However, I would like to suggest that we extend this to include to other species on our planet.  We need those "wild corners" for species like Monarch butterflies to survive.  Maybe this is also something that God had in mind when he told us to leave the corners of our fields.  Nowadays, very few people actually go out and glean fields, but a lot of wildlife species benefit from leaving space for them to live.  We do not need to squeeze out every bit of profit from every inch of land.  Leaving the corners for God's creatures benefits us all.  Keep this in mind when you plan your garden. 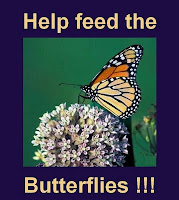 Hoodies Up for Treyvon in Minnesota

The verdict is in -- and although we must abide by the rule of law, acquitting George Zimmerman of murder or manslaughter in the death of Treyvon Martin just does not ring true for me.  On the one hand, having followed the trial pretty closely, I can see why the jury was not able to find him guilty beyond a reasonable doubt.  There was indeed some doubt as to exactly what happened that night.  Who threw the first punch?  Who was on top?  Who called for help?  There were conflicting testimonies, with parents on both sides each claiming  it was their son on the tape, etc.  So maybe it was not possible to say "beyond a doubt" what really happened.

But an acquittal does not necessarily mean the accused is morally or ethically innocent.  It seems clear to me that none of it would have happened at all if Zimmerman had not followed Martin in the first place.  Deep in my heart, I still feel that he provoked the tragedy.  It might not have been premeditated murder by legal definition, but it was no accident, either.


Tonight at the Minnesota State Capitol there is a rally called "Hoodies Up for Treyvon."  I live 100 miles away and can't be there in person, but I do raise my hoodie to say that the conversation cannot stop here.  Beyond the details of this particular case is the greater question of racial profiling in general, as well as the wisdom of those "stand you ground" laws.  This verdict sends a disturbing message that says if you feel threatened by the way somebody looks or dresses, you can justify stalking and violence against them.

When I was growing up, "self defense" meant that you could use force to save yourself, but only as much as was necessary to either subdue your assailant or escape.  It did not automatically mean you could use deadly force just because you felt threatened.  And even in the Old Wild West, you simply did not shoot an unarmed man.  There was a sense of fairness, even in self-defense.

Since Treyvon was unarmed, the original "threat" must not have seemed all that deadly -- unless we assume that Zimmerman felt a personal threat beyond just seeing a teenager walking home.  What did he see?  A black kid he did not know, wearing a hoodie in his gated neighborhood.  I believe it was that profile that initially caused Zimmerman to feel threatened -- and I'll bet that if Trevon had been a white guy with an umbrella (it was raining that night, hence the hoodie up), he would not have been stalking him that night.

Which brings us back to the original question:  Are we now going to say it is OK to stalk somebody just because you feel their appearance threatens you?  I certainly hope not.  That would be a terrible step backward in society that claims to value diversity.   This is an important discussion, and if anything good can come of the Treyvon Martin tragedy, let it be this:  that we all take a long, hard look at our own prejudices, and take steps to correct them.

The Importance of Pet Funerals for Children

When I was about 11 years old, my neighbor's dog had puppies.  Their four-year-old son accidentally dropped one on its head, and the puppy died.  The boy was not very upset about this.  He told his mother, "Just throw some water on it."  He had seen this in cartoons, where characters got blown up or crushed by a falling safe or whatever and then revived -- so why not in real life?

It was then that his mom realized her son did not understand the finality of death.  He really did think that a bucket of water would bring the puppy back to life.  So she decided to have a funeral for the little dog, inviting us neighbor kids to participate.

The puppy was wrapped in a soft blanket and placed in a shoe box for a coffin.  We all reverently watched as the box was put into a hole in their backyard.  Each of us then put in a handful of dirt.  When the hole was filled in, we marked the grave with rocks and added some flowers from the garden.  It was a beautiful funeral, and a lesson I never forgot.  I was old enough, of course, to understand about death.  It was the beauty of the simple ceremony that stuck with me forever.

This week, I passed the tradition along to my four-year-old grandson, Nick.  His brother's cat had 5 kittens on Friday, and Nick  got to see one of them born.  Unfortunately, two of them did not survive.  On Monday, he and his father brought the dead kittens to our place to be buried.  Usually I do this back in the field behind the woods, but because that is a long walk for both my grandson and my arthritic wife, we decided to bury them in a flower garden in the front yard.

The last time we had buried a pet, Nick was still too young to really understand what we were doing, but now he was older and very much wanting to participate.

Our memorial pretty much followed the format of that puppy funeral so many years ago, with the addition of putting tobacco into the grave.  This is a Native American tradition and, since Nick is part Indian, we wanted to honor that heritage as well.  Nick helped fill the grave, then helped me find and place the stones.  We all picked wildflowers to put on the grave, and my wife told the story of the Rainbow Bridge.  After saying our goodbyes, we all went inside to eat.  Later in the afternoon, when we were back outside, Nick decided on his own to walk over to the garden to visit the grave.

I believe these kinds of rituals are very important for children.  All too often, we assume that kids should be shielded from death, that it will be too traumatic for them.  I disagree.  Death is part of life, and it is much better for children to understand that, rather than just say their pet "went away"  and leave them wondering when kitty will come back.  Very often, the death of a pet is their first encounter with death, and a good time to teach about funeral customs.  Children need to grieve just as much as we adults do,  even if the deceased is just a turtle or goldfish.  Funerals, after all, are more for the living than the dead.  I never forgot the puppy funeral, and I hope my grandson will one day carry on that tradition with his own children.

Posted by Yonassan Gershom at 3:21 PM No comments: