On Jewish Theology and Abortion


That is a given.  Different rabbis might rule differently as to when it is permitted (usually handled on a case-by-case basis) but all agree that there are circumstances where it is kosher.  In  some cases it might actually be required by Jewish law; cases which, if  abortion is universally outlawed, might infringe on the religious freedom of Jews.

The main thesis of this essay is that, because Jewish theology interprets the abortion issue differently from fundamentalist Christian theology, the US government should not be deciding questions about when the soul joins the body.  To do so violates the First Amendment.

WARNING: If you plan to hit me with antisemitic crap over this about how "wrong" the Jews are according to your religion, don't bother.  Been there, done that.  But if you are seriously interested in my more mystical take on this regarding body and soul, then read on.

When does human life begin according to the Torah?


Genesis 2:7 says that God "formed Adam from the dust of the earth, breathed a breath of life into his nostrils, and he became a living soul" (or a living being: Hebrew nefesh chayah) .  So we have two aspects of humans: body and soul.  The body comes from the material world, the soul from the "breath of God" or spiritual world.  For literally millennia, the first breath was considered the beginning of life as an independent human being. This is still the way that Jewish law views it. (For more details on that, see this excellent article by Danya Ruttenberg "Why are Jews so Pro-Choice?")

Anti-abortion Evangelicals quote Psalm 139:13 and Job 31:15, which speak of God saying, "I formed you in the womb." These verses are regarded as poetry by Jews and play no role in Jewish law which, as I said above, we base on Genesis in the Torah.  While Christians see the Bible as a single book, and give equal weight to all material in it, Jews understand that the Bible is really a library, with different categories of material: Torah, Prophets, and Writings.  The Torah (Genesis, Exodus, Leviticus, Numbers, and Deuteronomy) forms the basis for Jewish canon law (halachah.)  The other books are considered to be various genres of literature: mostly history, sermons by the prophets, and inspirational writings like Psalms and Proverbs.  These materials are secondary to the Torah and are not cited in legal decisions.

I actually had an Evangelical tell me that Job is the oldest book in the Bible - trying to prove that it overrides the idea that life begins with the first breath as in Genesis - but that is wrong. The literary style of Job is like a Greek play (more on that) which puts it way later than the Torah.

The bottom line is, the question of when the soul joined the body is theology, and gets into First Amendment issues.  Should the govt be deciding a theological question over which various religions disagree? No.


The Catholic Church was more deeply concerned with the question of ensoulment than were the Jewish scholars.  "Life begins at conception" was not always their official doctrine (read more on that) but they were moving in that direction, and in 1974 it became official.  Pope Paul VI ratified the "Declaration on Procured Abortion," making it required doctrine for all Roman Catholics that abortion is forbidden because the soul joins the body at conception.

So why do I, a Jew, care about Roman Catholic theology?  Because, with the Pope's declaration, the political debate heated up. Back in the 1970s and 80s, the anti-abortion protesters were almost always Roman Catholics.  But gradually, their theology jumped denominational lines into fundamentalist Christian groups.  Although Catholics today still oppose abortion, it is the Evangelicals who are leading the charge to legally ban it.  As Cynthia Ozick once put it, we should oppose anyone "who proposes that the church steeple ought to begin to lean on the town hall roof."  Which is exactly what is happening now.  Hence the reason that Jews are concerned.

Today, the Catholic stance that "life begins at conception" has pretty much taken over the Pro-life movement. As an outsider looking in, I find it ironic that fundamentalist Christians, who have historically been anti-Catholic, are now basing their argument against abortion on a declaration by the Pope. Or are they?

The impact of embryology and DNA studies


Parallel to the Catholic Church's decision on abortion was the science of embryology.  Even in antiquity, people had seen miscarriages at various stages of development, but the process was not well understood.  When Watson and Crick unraveled the double-helix mystery of DNA in 1954, which led to the completion of the Human Genome Project in 2003, we suddenly had a better understanding of how the human body develops.  We could finally explain, scientifically, exactly what happens when the sperm and egg unite.   And we understood, at least to some extent, how genes carry our hereditary traits.

So the Pro-lifers seized on conception as the moment of full personhood, claiming that everything you are going to be is created in the union of sperm and egg through your DNA.

Again ironic, because we now have very religious people -- many of whom are anti-science in other areas -- relying on science to argue that the fetus is fully a person either at physical conception, or when there is a heartbeat.  Both of these are purely materialistic arguments. If you believe you are nothing but your physical body, that your DNA is all there is to your human existence, then the heartbeat argument works. An odd stance for a religious person. no?


But what if you believe a human being is not simply a matter of biochemistry? What if you believe there is such a thing as a human soul?  Then we are back in the realm of theology.  When does the soul join the body? And how do you prove that?  You can't, really.  Which is why Jewish law bases life on the first breath, which can be observed without the use of theology or mysticism.  Even atheists can agree whether a child is breathing or not.

I suspect this is also why Republicans focus on the heartbeat benchmark, because it can now be measured by ultrasound.  But what about the brain? Nowadays brain activity is a better marker for life. Does a six-week-old embryo with a heartbeat think?  A brain dead person has a heartbeat, but are they still alive?  Is there a difference between an adult kept alive by machines and a not-yet-viable fetus kept alive by a womb?

In the case of the brain dead person, family members get to decide, along with their doctors and clergy, whether to terminate life support - even though the patient still has a heartbeat. So why is that not also true of an embryo in the womb? Why is it murder to end the life of an embryo without a thinking brain but not an adult who is brain dead?

In fact, Judaism does not consider the death of an unborn child to be murder, based on  Exodus 21:22-25, which the New American Standard Bible (NASB) renders this way: "And if men struggle with each other and strike a woman with child so that she has a miscarriage, yet there is no [further] injury [to her], he shall surely be fined as the woman's husband may demand of him; and he [the guilty one] shall pay as the judges decide."  Fined, not executed for murder.  "Thou shalt not murder" simply does not apply here. 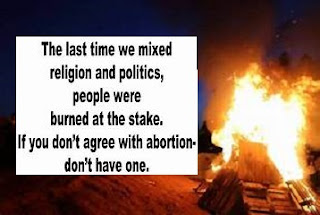 We are back to the original questions once again: When does the soul join with the body? When does it leave? Is the body the whole essence of a person, or is it a merely a garment for the soul? These are questions we should leave to the clergy, not the politicians. True, abortion is ultimately a woman's choice, sometimes along with the father of the child or other family members, sometimes not.  Religious women will also take their faith's teachings into consideration.  And they should be free to do so according to their own theologies, not dictated to by fundamentalist Christianity.

Addenda: Seems I am not the only one thinking in this vein.  A recent New York Times article discussed whether Jewish and Muslim doctors and women should get religious exemptions in Alabama under their new strict anti-abortion law.  After all, Christians have claimed exemptions from Civil Rights laws (such as refusing to bake cakes for gay couples) based on their faith.  So why shouldn't religions that allow abortions also get similar exemptions? Good question.