I woke up very early this morning and went outside for a dawn walk, to be met with the squawking of a huge flock of birds waking up in a distant tree. (Probably starlings, they were too far away to positively ID.)  I don't have a telephoto lens, just a digital point-and-shoot, but was able to snap this pic just as the flock took off with the sunrise.   Even though it's not the best photo I ever took, I'm pretty proud of it -- migrating birds have gathered in that same tree for years, and this is the first time I was able to capture them taking flight. 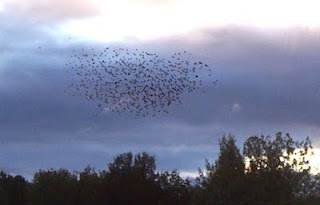 Flocks of chattering birds mean autumn is coming.  So does another sound:  the chirping of crickets.  I have always heard this as a sweet-sad sound: sweet, because I love the song of crickets, and sad, because it marks the beginning of the end of summer.  Crickets are around earlier, of course, but they do not get their song until they shed their skins for the final time and the males get wings with the "instrument" to make the sound.  It is the wings -- not the legs as is commonly thought -- that crickets rub together for this sound.

A third sound that I associate with fall is not made by nature, although it does require a natural  object to produce it.  This is the sound of the shofar or ram's horn, that Jews blow on Rosh Hashanah, the Jewish New Year, as well as during the Hebrew month of Elul that preceeds the holy day.   The Jewish calendar is lunar, so the exact date of Rosh Hashanah varies form year to year, but it is usually in September.  (This year it is quite late, beginning after sundown on the 28th.)

Some Christian Bibles mistakenly translate shofar as "trumpet" and refer to Rosh Hashanah as "the Feast of Trumpets."  The first time somebody asked me about the Feast of Trumpets, I had no idea what they were talking about, because no Jew would ever mistake a shofar for a trumpet.  Trumpets were also blown in the ancient Jerusalem Temple, but a shofar is definitely not a trumpet!  The shofar is an ancient, primitive horn that is literally made from an animal's  horn, usually from a male sheep but it can also be from a goat or gazelle.  (Never a cow, though, because of the sin of the Golden Calf.)   The shofar produces an archetypal, visceral sound that shakes the very soul and is meant to wake us up spiritually.  "Wake up, wake up!" the shofar says, "Return to the path of God, your Creator!"

I suppose that in the Southern Hemisphere, where it is now the beginning of spring, not fall, there are other nature sounds that Jews associate with Rosh Hashanah.  But for me, it is the sound of the crickets and the calls of migrating birds that remind me the High Holy Days are coming.
Posted by Yonassan Gershom at 1:35 PM

And appropriately to this blog, as I was out watering my potted plants so thay will survive the 2 days of Rosh Hashanah (which starts tonight) when I can't garden, I saw and heard the first migrating flock of Canada geese, honking their way southward. Shanah tovah to all!