It has been two years since I've been able to make maple syrup -- 2009 we were in a drought and I did not want to stress my trees.  Spring 2010 there was no snow left  (believe it or not) and a burning ban was in effect.   But this year should be perfect!  We had a wet summer in 2010,  plenty of snow cover, and now the sap is running!

This is always one of the most pleasant times for me to be outside.  The weather is mild, and the birds are starting to claim their territories.  On Monday, when I was putting the spiles (taps) in my trees, I heard chickadees and blue jays calling, woodpeckers drumming, and a flock of crows having an argument out in the woods.    No grouse drumming or turkeys gobbling yet, but it won't be long.

Commercial syrup producers would probably die laughing at my primitive backyard setup.   But it gives us enough syrup for our own use, and saves a lot of money.  When I checked in the grocery store recently, pure maple syrup was $7.99 for an 8-ounce bottle -- and that was for a local product.  (The Audubon Center of the North Woods, only a couple miles from my home, makes it every year as a fundraiser.)  I imagine if commercial shipping were also involved, the price would be even higher.  We usually get a gallon or more of syrup a year, which I can in pint Mason jars.  Add that up, and it's a pretty valuable crop! 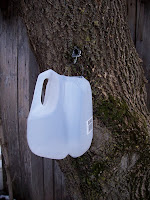 These are some pictures I took in 2008, which show the process. For "buckets" I use gallon milk jugs, which are free.  For spiles I have the old-fashioned metal kind I got years ago.   I cut the top off the jug to make it more like a bucket, then add a wire loop for a handle.  This works well, and at the end of the season I just remove the wire, wash the jug and recycle it. The spiles I save for next year.

By the way, you don 't have to use sugar maple trees. ALL maples have sugary sap, and many make great syrup.  Mine are boxelders (also known as "split-leaf maple"), which many people consider "trash trees" but I see as a valuable resource. The syrup I get from these trees is excellent.   Plus, the leaves are the food plant for Cecropia moth caterpillars.

My boiling apparatus is simplicity itself: two rows of cinder blocks with some old refrigerator grates on top.  Then I build a trench-style fire between the blocks.  For pans, I use disposable aluminum baking pans.  (The best kind have wire handles, although the ones in the pix don't -- I can't always find them here.)   I suppose this isn't as ecological as using  heavier  kitchen pans and washing them, but if you have ever tried to clean a pan that was used over an open fire, you will know why I prefer this for cleanup.  (Yes, I know about soaping the bottoms of campfire pans, but again, it's a horrible mess to bring into the house.  And don't worry about that dead grass you see near the fire -- it's actually wet straw I stomped into the mud to avoid slipping on the layer of melting mud that forms over the still-frozen soil.  Believe me, it was way too soggy to be a fire hazard.) 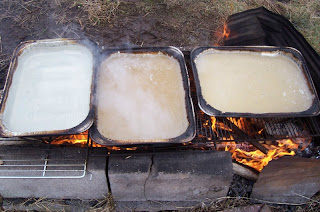 ﻿﻿ As you can see, syrup in the early boiling stages doesn't look very golden.  There is a sort of whitish stuff that precipitates out -- this has to be filtered out later or the syrup will be bitter.  I use a piece of ordinary felt inside a kitchen strainer.  Timing is very important: If you strain too soon, the white stuff slips though, but if you wait too long, the syrup is too thick  to go through the felt.  Some people use a hygrometer and measure the specific gravity, or a candy thermometer to measure the temperature.  I just go "seat of the pants," having learned from years of doing this.   If it's still too thin after straining, I just boil some more.

It takes a lot of sap to make syrup -- about 30 gallons for one gallon of product, so you have to keep adding sap all day.  During this time, I do a lot of yard cleanup.  The firewood comes from stuff I saved up last year, plus any dead wood that the wind might have brought down, etc.  You need a continuous hot fire for this, so smaller stuff such as lower dead branches work great.     In this next pic, you can see that the pan on the left (pan A) has a higher sugar content than the one on the right (pan B).  That's because  as the sap boils down, I ladle it from   B to A, then fill pan B with more sap.  I also pre-heat the cold sap in big tomato juice cans before adding it to pan A.  This keeps thing boiling constantly. 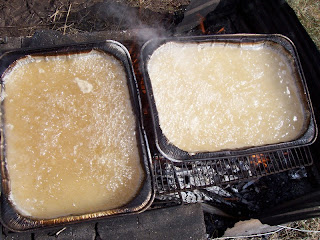 To keep the syrup from boiling over as the sugar content rises, you need to add some sort of oil to break the tension on the surface.  Native peoples used various animal fats, and the pioneers used to hang a strip of bacon over the pan and let is slowly drip in.  Nowadays a lot of people use butter or margarine (which is why Mrs. Butterworth's syrup advertised itself as being made with real butter - an innovation in its day.)    This is why, if you keep kosher, maple syrup is off-limits unless it has kosher certification.   I use 100% vegetable oil so I can gift the syrup to both my kosher and vegan friends.   So, if you buy syrup and are concerned about animal products in your food, then it is a good idea to ask what kind of oil or grease they are using.  Especially at flea markets and roadside stands! 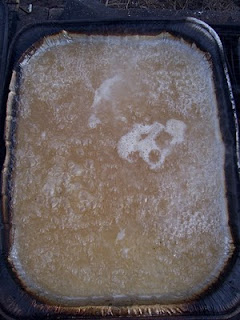 This pan is just about ready to take inside for finishing.  At this point, I ladle it through a tea strainer to get as much ash out as possible (with a wood fire, that's inevitable) into a stainless steel deep kitchen pot (one with a heavy copper bottom, less likely to scorch).  I then douse the fire and carry the syrup into the kitchen, where I finish boiling and straining it.  I let it sit overnight so any leftover impurities settle to the bottom.

In the morning it's easy to pour off the clear syrup, leaving any sludge behind.   (I add the sludge to the chicken mash -- they like a sweet treat, too!)  I then sterilize my canning jars and can it the same as for jelly.  Done right, it keeps for years -- but once you open a jar, refrigerate it or it will get moldy.


So there you have it -- the first crop of the year on my land.  But enough blather -- time to go out and collect that sap!

Posted by Yonassan Gershom at 12:55 PM

This is bringing back nice memories of last spring, which was my first maple sugaring experience. This year I'm in the South, which is the wrong climate for syrup, but I'm moving to Wisconsin soon and I'm looking forward to more sap boiling come next spring! Anyway, I've been reading and enjoying your blog for a while now, keep it up!

Glad you are enjoying my blog, Rebecca. I really do love making syrup, it's the first real spring activity of the year (I'm not much of a winter person) so it feels so good to get outside. Wisconsin is just acros the border and has the right climate, too, so I hope you move to where there are lots of maples:)

What a fascinating process! I have never seen this done, so I appreciate your photographs. It's great of you to make use of the part that you strain off, too. Your chickens are probably laying extra sweet eggs right now.

Well, they are laying LOTS of eggs -- another sign of spring!