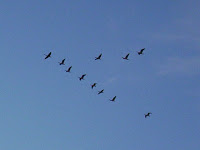 The Canada geese are coming back now -- I've seen several flocks heading north.  With all the flooding going on here in Minnesota, there's plenty of open water for them to swim in.  (Luckily we are not in a flood zone, but my domestic geese are having a good time wading in puddles and honking at their migrating brothers.)

Speaking of migration, did you know that until the late 1700s, it was commonly thought that birds hibernated in the mud in rivers and lakes during the winter?  The British doctor Edward Jenner, who is best known for discovering the smallpox vaccine, was also interested in hibernation, and conducted extensive studies on hedgehogs and other hibernating mammals.  He was among the first to remark that birds were not dirty or muddy when they reappeared in the spring.  Nor were they thin and hungry like other hibernating animals when they emerge in spring.  So where did the birds go?

Jenner dissected spring-returning birds and examined the contents of their stomachs, to see what, if anything they had been eating.  He found seeds of plants not native to Britain. He also noted that these species of birds had been seen flying far out across the oceans. So he hypothesized that the birds were leaving Britain to go someplace else in winter. Unfortunately, Jenner died before he was able to write up his studies on bird migration, but his family published them after his death. Modern research has confirmed his theory:  birds do not hibernate in mud, they migrate.

That such a basic scientific fact was not discovered until the late 18th century raises the question of various "scientific" statements made by the early Jewish sages.  When I was growing up in the 1950s and 60s, it was taken for granted among Jews that when it came to science and medicine, the modern discoveries take precedence over any folklore that might be in the Talmud or other earlier writings.   We went by the opinion of Maimonides, one of the greatest Jewish philosophers and a medical doctor, wrote in the 12th century: "Do not ask of me to reconcile everything that they (the Sages of old) stated from science with the actual reality, for the science of those days was deficient, and they did not speak out of traditions from the prophets regarding these matters... " (Guide for the Perplexed, 3:14)  In other words, when it comes to science, the Sages were not divinely-inspired prophets nor were they infallible.

Rabbi Samson Raphael Hirsch, a major 19th-century German Jewish theologian, later wrote: "...We find that the Sages themselves considered the wisdom of the gentile scholars equal to their own in the natural sciences. To determine who was right in areas where the gentile sages disagreed with their own knowledge, they did not rely on their tradition but on reason. Moreover they even respected the opinion of the gentile scholars, admitting when the opinion of the latter seemed more correct than their own." (From a letter written in 1876  to Rabbi Pinchas M.E. Wechsler.)

That was the attitude I grew up with: science was science, no matter who discovered it.  But more recently, with the rise of the Haredi (post-WWII fundamentalist Orthodox Jewish) movement, there are those among my Jewish brethren who expect us to take absolutely everything the Talmudic rabbis said as literal scientific fact, trumping anything the secular scientists might since have discovered.  I find this impossible to do without having to turn my brain off -- an option I doubt God would want.  After all, God gave us brains to learn with.  The rabbis of the Talmudic era were very wise, but when it came to science, they were limited to what was commonly known around them.

Thus, you find  things like the curious statement that "lice come from sweat" and  it is therefore permissible to kill them on the Sabbath  (Shabbat 107b)  when we normally do not kill living things.  At the time of this ruling, "spontaneous generation" of insects and other creatures was taken for granted by the whole known world, not just the rabbis.  Aristotle wrote that certain lower animals “are not produced from animals at all, but arise spontaneously: some are produced out of the dew which falls on foliage... others are produced in putrefying mud and dung, others in wood, green or dry, others in residues, whether voided residues or residues still within the living animal.”   Eels and fishes were commonly believed to come from the foam of the sea and flies from rotten meat.

But today we know that lice come from the eggs of other lice, and are indeed living things.  The same goes for the Talmudic mice that are "half dirt and half flesh" (Chullin 9:10, Sanhedrin 91a), another biological impossibility.   For that matter, DNA wasn't even discovered until 1962 -- when I was still in high school.   Yet look how much  -- in my own lifetime! --  that discovery has fundamentally changed our entire perspective on the natural world!  All the "ancient wisdom" about passing down characteristics through "blood" is now rendered obsolete.

These may seem like trivial issues to some people, but for many Orthodox Jews, they are serious challenges to our faith.  If the Sages were wrong about lice and mice, are they also wrong about other things, too?   Can we trust anything the Talmud says in the face of these absurdities?

If you see Judaism (or any other religion) as a house of cards that will tumble with even the slightest question or error, then science can seem very threatening.  But if you can make a distinction between science studying the "how" of the  natural world and theology dealing with the "why" of human existence, there is no conflict between science and religion.   Science tells us how things work, but it is neutral on questions about God, the soul, and religious laws.  Scientifically, there is no reason I should not eat pork or mix meat with milk, because these laws are not about science per se.   I don 't keep kosher because is is more healthy or more natural,  but because it is the will of God for me as a Jew.   And if I had lice (which I thankfully do not!) it would still be permissible to kill them on the Sabbath, even though we now know they do  not spontaneously generate from sweat.  This is also why, when I see birds migrating, it is no challenge to my faith.

(For an in-depth discussion of spontaneous generation and Jewish law, see  The Sweat-Louse, the Dirt-Mouse and the Dong Chong.)