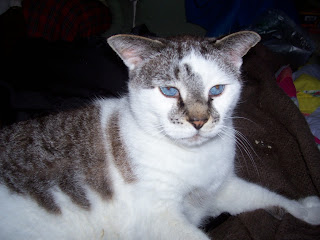 Posted by Yonassan Gershom at 12:25 PM

May his memory be a blessing to you.

Baruch Dayan Emet
May Sapphire's name and memory be always for a blessing.

Baruch Dayan Emet
May Sapphire's name and memory be always for a blessing.

Thank you everyone for your kind words. Peace & blessings to all.

Dear Rabbi Gershom,
I stop by your blog every so often to read your posts. Your kindness and concern for all creatures touches my heart and I love your stories as well. When I stopped by today to see if there were any new posts I saw that your little buddy Sapphire had passed over. I just wanted to say how sorry I am for your loss. My most sincere condolences to you and your family. Be well.

Thank you, Ghost. He was a wonderful cat and is missed. But at least he went peacefully.

He was lucky to have you.