Kudos to "Hatchlings" for listening to me!

If you play the Hatchlings egg hunt game on Facebook, then you know that there are always tons of Christmas-themed eggs every year.  But up until this year there had only been two Hanukkah eggs -- and both of those were way back in 2009.

OK, it's pretty normal for Jewish holidays to be ignored by the dominant culture.  But I have to admit that the ubiquitous Christmas commercialism gets pretty old when you are constantly bombarded from all directions with a holiday you don't even celebrate.  (My Christian friends tell me it gets old for them, too, but that's another story.)

If you have Jewish kids, "The Season" is the time of year when they feel most left out.  Frankly, so do we adults.  So anytime there is even a tiny little acknowledgment of a Jewish holiday in the mainstream world, we Jews pounce on it like a starving dog on a bone. 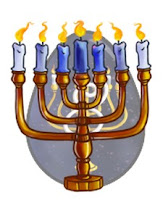 Well, this year Hatchlings threw us more than a bone -- we got a whole week of meals.  Eight beautiful Hanukkah eggs.  You see, I got to thinking that maybe the reason we had never had a Hanukkah series might be because the Hatchlings design team didn't know what the symbols of Hanukkah are.  Hatchlings eggs tend to be in series of eight, and Hanukkah has eight days.  So a while back, I suggested these possibilities:  Judah Maccabee, menorah, latkes (potato pancakes), sufganiot (Israeli donuts), gelt (coins), presents, bottle of olive oil, Star of David.  Well, they took my suggestion -- and now we have those eight things in a Hanukkah egg series (the menorah on this page is number 8.)  Which just goes to show, it's better to step forward with a solution rather than sit back and grumble about a problem.

So my New Year's resolution is this:  I'm going to look for more ways to facilitate inclusiveness in this increasingly divisive world.  Sometimes you get left out, not from prejudice, but from sheer ignorance.  Fortunately, ignorance is curable with education.   Not to mention activism.   (Now let me see... we've never had any Passover Hatchlings eggs, and Passover also has eight days... so what would be eight good symbols to use for  a Passover series?  For that matter, Kwanzaa also has eight days...)

Posted by Yonassan Gershom at 8:32 AM

Although, we should note, they did the SEVEN-BRANCHED MENORAH that was in the Temple, not the nine-branched Hanukkah menorah we light on the holiday. This is probably why the candle count on the eggs was rather strange -- #1 had no candles lit, #2 had one, etc. and they weren't lit from right to left. But hey, at least we got something.

Nice article, but most of the collections this year have been seven eggs, not eight.

I suppose you are right -- but we do have a lot of eight-egg series from previous years. As well as some 12s for Christmas and for zodiacs. And a few 6s as I recall. It doesn't seem to be written in stone.

It is so easy to get it terribly wrong when dealing with a different culture or religion, even if well intended.

There are mistakes that should not happen, that even the barest amount of checking would show. But some mistakes can happen even if researched, such as saying to some Jews "go in peace" is the equivalent of saying drop dead and others actually use B'Shalom and not L'Shalom.

If all were like you, appreciative of the effort, it would be so much easier. Gentle correction is often so much more effective than harsh words.

Unfortunately in every group there are those who would pounce upon an honest mistake as proof of malevolence. They make it easier to ignore rather than acknowledge the customs of a minority group

And there are times where outrage is probably appropriate. Serving ham sandwiches to Jews and Muslims is beyond stupid. Using butter on a meat sandwich is a no no. However using margarine is also, but less obviously, wrong, because it looks like butter and many won't ask.

The Menorah error is very common and understandable -- if they were going by the STORY then it was indeed a seven-branched one. And most non-Hebrew-readers would nt know to light from left to right (the Hatchlings collection alternated sides) -- heck, a lot of Jews get that one wrong. I wasn't offended -- especially since the illos for things the eggs "hatched" into other items were spot-on.

RE: serving ham to Muslims and Jews, that actually happened at a major mid-east peace conference in Madrid back in the 1990s. I remember the newscasters noting that the only thing the Arabs and Jews could agree on was not to eat the HAM on the table! Somebody didn't do their homework...