In Loving Memory of My Sweet Coolio Cat 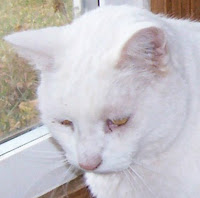 Coolio, my old white cat, passed away around one o'clock in the morning on September 22, 2012, which was both the fall equinox and Shabbat Tshuvah, the Sabbath that comes between Rosh Hashanah and Yom Kippur.  It was a very auspicious time for my 15-year-old feline friend to make his transition into the next world.

We found Coolio as a half-grown,very hungry white kitten who was hanging around our hobby farm when we moved there in the spring of 1997.  Half his tail was missing, and what was left was all broken up and bent. ( I always wondered if he had gotten caught in a trap.)  He had been stealing dog food from my neighbor's yard, but they didn't really want him.  All it took was one bowl of cat food for him to decide he was going to be ours for life.

They say that white cats don't catch as much as tabbies, because they are more visible to the mice.  Coolio must have known this, because he used to roll in the dust on our dirt road, to camouflage himself before he went hunting.  He also learned to sit on top of rocks, logs, and other perches, then patiently look down into the tall grass.  When a mouse or other prey came by, he pounced off his perch like a mountain lion and, more often than not, succeeded.  He certainly did his share of rodent control around here!

When he wasn't outside hunting, he loved to cuddle.  I used to call him "The Undercover Cat," because on chilly nights he would crawl under the covers with me, with just his head poking out against my cheek, purring softly.  In his prime he was a rather fat cat (having known hunger, he tended to overeat on whatever food was around).  Once, when he was curled up in the front room with his head tucked under his body, my grandson asked, "What is that?"  I replied, rather sarcastically, "That is a cat."   He laughed and said, "Oh, I thought it was a fur pillow!"  (Which would be a real shock in our vegetarian home.)

Coolio was indeed soft as a cuddly pillow -- so much so, that I used to sing him a silly song to the tune of "Calendar Girl," about how "I love, I love, I love, I love my Coolio Cat, Oh my sweet soft Coolio Cat..."  (What can I say?  I'm autistic, and I have this weird thing with tunes going through my head, often with new words coming out of my own brain.  Sometimes I feel like I'm living in a Broadway musical.  On the other hand, my autism has brought me much closer to my animals.)

Coolio also loved to sit in the sink.  So does his black female friend, Nightshade.  I don't know what it is about the sink that cats love so much.  I theorize that the porcelain must be cooler in the summer, and in winter it's often warm from the water that went down the drain after washing.  Nightshade is like a little heat-seeking missile who can always locate the warmest spot to curl up.  On Shabbat you can find her sitting next to the warm crock pot that holds our vegetarian Sabbath soup.

Earlier this summer I noticed that Coolio was slowing down, spending most of his time closer to home, and not eating as much.  There wasn't anything really wrong with him except old age.  I got him a bigger variety of wet foods, and learned that he preferred the kinds with fish, probably because they smell stronger.  Older cats, I read somewhere, tend to lose some of their sense of smell.  This seemed to be true with Coolio.

As he got closer to death, he slept most of the time, often on the bathroom windowsill, where the sun warmed him in the morning and he could look outside and smell the flowers and trees.  On nice days I would take him outside.  He was getting too slow and vulnerable to be out there alone, so I would sit on the porch and watch him take short walks and lie basking in the sun.  At night I would carry him upstairs with me, because he was too weak to climb the stairs by himself.  Toward the end he was pretty thin and bony, so he preferred to sleep on my bed, curled up on one of his fuzzy cat blankets.  (I did worry about incontinence, but decided it would be no worse than cleaning up after a messy human baby.  As it was, he was able to get to the upstairs catbox and never did leak.)

Some people reading this may wonder why I didn't just have him euthanized when it became  obvious he was dying.  I'm not 100% against euthanasia if an animal is severely injured or in serious pain.  But I do believe that animals have souls -- maybe not exactly like human souls, but there is a consciousness there -- and that it is best for them to die naturally whenever possible.  Coolio wasn't really suffering, he was just very old.  And he seemed to know the end was coming, as animals often do.  Had he been a wild animal, he would have crawled off in the bushes somewhere to die alone.  Because he was bonded with me, he chose to be in my room, away from the hubbub of the household but still in familiar surroundings.

On the night he died, he was lying beside me on my bed.  I don't know if he had made a noise or just moved, but I woke up and saw that the end was at hand.  As I stroked him, he purred very softly, his breathing became shallower, his heartbeat slowed.  Then he took the last breath.  I felt a few more heartbeats, and he was gone.  It was a sad moment, but also very spiritual.  I have been at the deathbed of many animals over the years (as well as a few humans), and it never seems to amaze me, this mystical thing called death.  One moment they are alive in this world, and the next moment, they are gone.  There was no Grim Reaper come for Coolio, just the soft, quiet whisper of angel wings.  I only hope that when my time comes, my death will be as gentle and easy as Coolio's was.  I miss him very much, but I also believe he is waiting for me at the foot of the Rainbow Bridge, and that one day we will go together to the spiritual Garden of Eden.

Posted by Yonassan Gershom at 3:05 PM

POSTSCRIPT: In my weird autistic brain, Coolio's song has now morphed from "sweet soft Coolio Cat" to "sweet soft CUDDLY CATS" --which applies to all of them. I think maybe this is Coolio's legacy to all his feline friends who are still with us here. Maybe his spirit is telling me to share the song with all the cats as I cuddle them. It feels right.

I am so sorry for your loss. Our Puzzle passed away last year after being with us for almost 12 years. We still miss her greatly. I am sure your Coolio knew he was loved and is waiting for the day when you are together again! Bobbie ( queeniez71 from ebay blogs)

There is indeed something deeply spiritual about the natural death of a loved pet. Since reading your blogs my attitude and understanding on a number of issues has changed.

PS I do read and appreciate your responses but have refained from replying where I have nothing to add.

Loss and bereavement are always hard. Not sure if that says more about our pets' souls or our own. Probably both.

Thank you to all for your kind condolences.

Tony: No need to reply to everything -- I understand there cmes a time when a thread has said all it needs to :)

Shunraya: I think it is about both us and our animals. Grieving and funerals are more for the living than the dead, a way for us to express our losses.

Coolio was so blessed to have you. I'm boohooing.