A Small Miracle: The Extra Lulav and Esrog 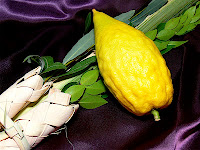 On the Festival of Sukkot (Feast of Booths), Jews not only put up the Sukkah (booth) to eat our meals in (about which I have written before) we also wave the Four Species -- palm, myrtle, willow and estrog (also spelled etrog) fruit -- in the six directions on each day of the holiday (more on the meaning of that later).  Special sets of these are imported from Israel, and must be ordered in advance.  And therein lies a tale that proves how God works in mysterious ways.

Because I live in a remote area of Minnesota, 75 miles from the nearest synagogue, the easiest way for me to get my lulav set is to order online.  A guy named shmuly770 was selling them on eBay and since I also sell on eBay, I ordered from him.  According to plan, the lulav should have arrived by UPS on or before Thursday, September 27, well in time for the holiday, which begins this year on Sunday night.

However, there was a problem with UPS being late, and on Thursday morning UPS tracking still showed the package as "in transit," with the last known station still out in California.   Shmuly was worried that I would not get my set on time and not be able to do the mitzvah.  Out of the goodness of his heart, he sent a second set by Priority Mail at his own expense -- without me even asking.  (Such a mensch!) As it turned out, both sets arrived on time   But here is WHY Shmuly had to send that extra set:

I volunteer at the federal prison just outside of Sandstone to visit Jewish inmates.  Today I am scheduled to go there to put the shchach (natural plant materials) on the sukkah that is erected each year inside the compound, and be sure everything is kosher.  (The sukkah walls can be put up by anybody, and at the prison this is done by a work crew, but the shchach must be put on by Jews.  So I always go to personally supervise this.)

When I called the chaplain's office on Friday to be sure the sukkah was up and the greens were cut, he said yes, all that was ready, but their lulav set had not arrived yet. (It was also coming by UPS).  If it came Saturday he would not be able to get it from the warehouse because it is not open on weekends.  The chaplain himself was going to be gone Monday through Wednesday, which meant the soonest he could get it would be Thursday -- three days after the holiday started -- oy vey!  (Apparently only the chaplain can retrieve packages for the chapel, for security reasons.) But YES, I could bring in and donate the extra set I "just happen" to have on hand now -- which I will do today!  So this is why my first package was late, and why Shmuly had to send me an extra set!  Such a great mitzvah!

Now for the meaning of the Four Species.  Actually, there are several interpretations (as is often the case in Judaism), but I like this one best:

The Palm is tall and beautiful but has no scent.  It represents the Jew who has scholarly learning, but is lacking in actually doing the mitzvot.

The Myrtle is a scrubby bush with a lovely scent.  It represents the Jew who has very little Torah learning, but does many mitzvahs, acts of charity, and has compassion.

The Willow has no scent, but it is flexible.  This is the Jew who has neither Torah learning nor is he (or she) observant, but has humility and bends before God like a willow.

The esrog fruit is both beautiful and has a lovely scent.  It represents the Jew who has both Torah learning and mitzvot, but may be tempted to become proud and distance him/herself from the rest of the community.


In the ceremony, the first three species -- palm, myrtle, and willow -- are bound together and held in one hand, while the esrog is held separately in the other.  Only when all four species are brought together, with the esrog touching the other three, do we have the ceremonial Four Species.  In the same way, only when all the Jews, learned or not, observant or not, come together as one, do we have the complete Jewish community.

In addition, all four of these species grow near water, and on the first day of Sukkot we add the prayer for rain to the liturgy. The word "Hosannah" come from the Hebrew ho-sha-nah, meaning "save us now," and is taken from the Sukkot prayer for rain.  In Israel, this is normally the beginning of the rainy season, and here in Minnesota we usually get fall rains also.  However, we are in the middle of a severe drought right now and there has been no rain on my land for two months.  Israel, too, is suffering from drought.  So as I wave my lulav this year, I will indeed focus on rain for the land and water for all God's creatures who live upon it. (Strangely enough, rain often does come during Sukkot, no matter when it falls during the month.)


Wishing you all a joyous and, hopefully, rainy Sukkot.

Posted by Yonassan Gershom at 9:04 AM

Sukkah's up and decorated, and we're half an-hour from lighting here in the hills of the Shomron. Forecast is for a bit of drizzle -- just enough to remind us who's in charge.

Only 10am here, still working on it, but we are on time -- no rain forecast here until maybe Weds. Chag Sameach!

Just to let everyone know: The extra set was delivered to the prison as planned, and the inmates were very grateful! We got the shchach up OK, the sukkah is kosher, and Sunday afternoon we had a nice learning session in the sukkah in prep for the holiday. (Not to mention we also educated the officer assigned to guard us out there in the compound.)

You ask a question to one who possibly should not answer such a question and thus does not reply. And yet an answer comes.

Wow this is amazing Story. SHMULY IS AT gotetrog.com

Miracles happen around us all the time, we just have to recognize them. Thanks for the link, I'll buy from him again :)