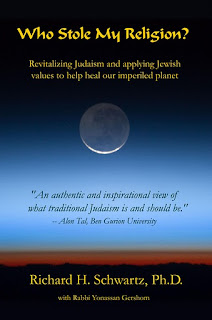 Posted by Yonassan Gershom at 11:39 AM

Looking forward to seeing this. I read John Shelby Spong's book on rescuing religion from the "right". It inspired me, but eventually I realized that I am too far left for just about any religion. Although there are many interpretations of the values expressed in the Bible, most who claim a religion, believe in some core miracle that "saves" them and puts everyone else outside of their group. We need to be rescued from that way of thinking.

Thank you for visiting my blog, Lausten. I think you will find both universalists and exclusivists in just about any group, it's not limited to religion. I am very leftist politically, but have never really felt very cocomfortable there socially, precisely because it is often so anti-religious. I have often felt as if I were caught in the crossfire.

Regarding being "saved," that whole idea is totally alien to Jewish thinking. Being Jewish is more like belonging to a native tribe, with strong cultural aspects as well as religious ones. And being "chosen" does not mean "better than." It is more like having a duty to fulfill.

Book production has been held up temporarily due to some technicasl glitches, but Richard's blog is alive now at WhoStoleMyReligion.com -- it's on Blogspot so it's easy to visit from here.

As a Christian I have often felt the same, that our modern society is in no way a Christian one as so many claim.

I see Biblical references to a eye for an eye, as command to keep responses proportionate not as a requirement for revenge.

Revelations 11:18 says something along the lines I will destroy the destroyers of the earth. I fear that means us.

Apologies for quoting a different faith at you, but it seems relevant.

As I am quiet new in Jewish, looking around for some Jewish information> Got something important here. Nice to get it.
Have you seen this video goo.gl/Fvyjz ? It helped me get over my internal anger.

Anonymous: I just now saw your comment on "eye for an eye" -- in Jewish law this NEVER MEANT REVENGE! It was meant to limit the claims a person could make for damages -- in monetary compensation. So, for example, the loss of a king's eye was not worth any more than the loss of a peasant's eye. (Compare this to some ancient civilizatons where ven TOUCHING the king meant death.)

There is no record anywhere in Jewish law of somebody's eye being poked out as "eye for an eye." The problem is, for 2000 years Christians wrote off Jews as "unsaved" and "Christ killers" and therefore it was heresy to talk with us about the original meaning of these words --as well as many other things in the Bible that have been badly distorted in Gentile circles.

Only in the mid-20th century did there begin to be any serious interfaith dialogue --and even today it is relatively rare to have real attempts at understanding instead of "dueling Bibles" shouting matches. Here in rural Minnesota where I live, my Christian neighbors rarely discuss religon with me -- they get very threatened when they find out that Jews are not the "Old Testament Hebrews" they learned about in Sunday school, and that we read the texts very differently.