﻿﻿﻿ Now that the snow has melted, I can finally get back into our woods to see what is going on there (I keep telling myself to get snowshoes so I could hike there in deep winter.  Oh well, maybe next year...)  The Pileated Woodpeckers sure have been busy chopping away at dead trees!  I haven't found a nest yet, my guess is they are either looking for insects, or trying out different trees to see if they are suitable for a nest.

This illustrates the importance of leaving large dead trees for these big woodpeckers to use. The back five acres of our land are pretty much left as-is, except that I collect firewood there for campfires and maple syrup, and I maintain a trail (which will need some serious work this year. Lots of dead trees and branches came down in the heavy winds we had a while back. And the heavy snow totally flattened the wild raspberries across the trail in places -- that should make picking the fruit interesting this year! On the other hand, it will be easier for the grouse to eat the berries so close to the ground.)

Anyway, back to woodpecker holes.  (To see enlarged versions of any of these pix, just click on the picture.  I use thumbnails on my blog so it will load faster.)

This tree (on the right) was the first I spotted, and absolutely amazing! Just look at the huge holes the birds have chopped out.  There was also one at the top that was a literal trench about 5 feet long!  Unfortunately, it did not photograph well, because the sun was behind that side of the tree at the time.  But you can guess from these pix that it was HUGE!  The top of the tree had also  broken  and fallen off where the bird had chopped so far through, the tree broke. 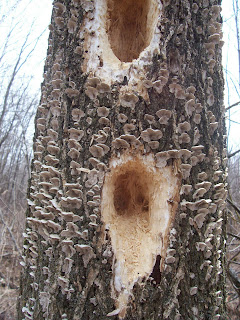 This next picture is a closeup of two of the lower holes. Notice that the entire trunk was covered with a small species of shelf fungus. I imagine that had helped to soften up the wood.  This is my favorite in this series of photos.    There is just so much interesting texture and contrast between the delicate fungi and those big holes!

These next two shots are of another tree I found in the same general area, clearly in the territory of the same birds.   There were more dead trees with evidence of woodpecker action, but these were the most dramatic.   A big pile of wood chips like this was at the bottom of the other tree, too. 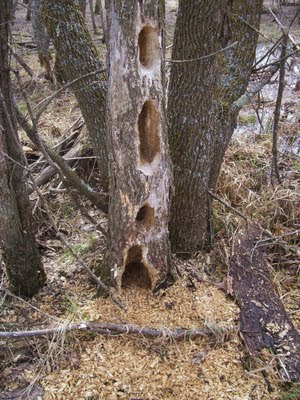 This is a closeup of the base of the same tree.  I almost expected an elf to be sitting in there, the hole was so storybook perfect.  More likely the base is now so weakened that this tree will soon fall, where it will become shelter for the insects, salamanders, and other creatures that like to live under fallen logs. 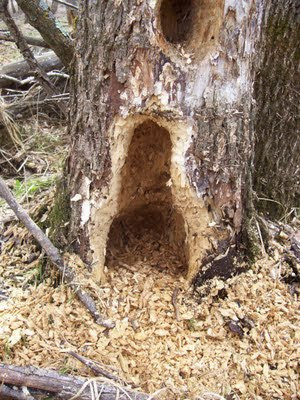 Posted by Yonassan Gershom at 10:08 AM

Those are amazing tree-holes. I've never seen anything like it. We have Pileated Woodpeckers here, so I'm going to have to look for holes like that.

I was pretty amazed, too, Robin. Welcome to my blog, and glad you enjoyed the pix!

Wow, that's impressive! I hope they continue to stay away from your house.

They seem to be happy with all the dead trees around here. I have found several more with holes since taking these pix. Plus my dogs bark if someone (or something) knoecks on the door -- or the house!