"A Sacred Duty," the film -- behind the scenes at my place in the country 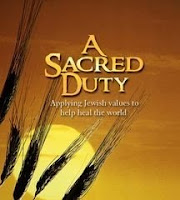 On June 6, 2006, film director Lionel Friedberg came to our farm to interview me and film our geese and chickens for a documentary called "A Sacred Duty: Applying Jewish Values to Help Heal the World,"  sponsored by the Jewish Vegetarians of North America (JVNA). Friedberg has produced films for the Discovery Channel, National Geographic, PBS, etc. so this was a real honor.

The film covers Jewish teachings on ecology, non-violence, vegetarianism, etc. Footage was shot in the USA and Israel (and maybe elsewhere?) and includes a number of prominent rabbis, scholars, animal welfare activists, vegetarians, etc. I got involved both because I'm on the advisory committee of JVNA and because I'm a Hasidic Jew living in the country who actually has animals.  (Nowadays, most Hasidim are urban people, but this was not always the case. Hasidim in pre-Holocaust Eastern Europe lived mostly in small rural villages.)

I also got involved in this film because I believe it is very important for people to know that there are Orthodox Jews who care about peace, the environment, civil rights, etc. Right now, the only images of us that many people see are from the war between Israel and Palestine -- but I won't go into my rant about that!

We were originally going to film outdoors in the morning, then do the interview with me in the afternoon, but nature decided otherwise.  There was a huge, powerful thunderstorm that morning, so we had to reverse our schedule.  Luckily we did the filming before the record heatwave and drought hit Minnesota that year, when everything was still lush and green.   The storm washed everything clean and just perfect when it cleared.

One of my hens, whom I called Mama Hen (because she was the best mother and just loved to raise chicks) had a 3-week-old brood of four. They were just the right age to be little movie stars -- old enough to be outside without risk of getting chilled (yes, it actually was chilly back then!) but still young and cute enough to be just adorable. We did a sequence where I carried the chicken family out into the yard in a cage that, I explained, was the size of a battery hen cage, where chickens on factory farms spend their entire lives. Then I opened the cage and let them all go free to scratch, peck follow their mother around. (Unfortunately, this part did not make the final cut, but Friedman has the footage, so maybe it will get used someday.)  However,  Mama Hen and her chicks did make it into the movie, along with some of my geese running freely (in contrast to some horrible factory-farm footage.)

The interview part was done indoors and covered my philosophy on how Jewish mysticism fits with vegetarianism, some Hasidic teachings about animals, etc.  Of course, I'm not the only one in the film, but a section of my interview was used to introduce it -- for which I am both humbled and honored.  The film has been released on DVD and you can view it for free on YouTube at the http://www.asacredduty.com/ homepage, where you will also find a printed overview and a list of all the rabbis and educators who appear in it. (And yes, my Israeli readers, there is a llink to a version with Hebrew subtitles.)  In addition, if you are interested in Jewish vegetarianism, I recommend visiting the JVNA website at JewishVeg.com.

UPDATE:  Mama Hen has passed on and crossed the Rainbow Bridge.  She was 11 years old, a full lifespan for a chicken, and had a good life.  In a way, appearing in this film became sort of a memoral to her.
Posted by Yonassan Gershom at 11:28 PM