My last few blog posts have been rather heavy reading, so I thought I'd lighten up today with this true story. 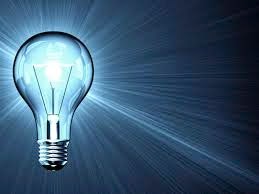 In the past few months, the light over our kitchen sink mysteriously went on and off at all hours of the day and night -- seemingly on its own.   Most disturbing was the fact that the light often went off on Shabbos (the Sabbath) -- a time when observant Jews do not turn lights on and off.  I would come downstairs in the morning and the light would be off, even though I knew it had been on when I went to bed.  Later in the day, it would be back on again.  There was no discernible pattern to this, it just seemed to randomly happen.

No, there wasn't a short in the wiring or the light socket.  No, the bulb wasn't loose.  Nor was it defective -- we actually tried replacing it.  No effect, the same thing happened.  My wife and I each "accused" the other of accidentally turning it on or off, and each of us denied it -- multiple times.  I began to wonder if the house was haunted.  Either that, or we were both getting very absent-minded in our old age.

Then one day, I caught the culprit.  The light has a pull cord, and one of our cats had discovered that if he grabbed the little ball at the end and pulled, he could turn the light off -- or on.  There he was, plain as day, pulling it multiple times -- on, off, on, off, on, off... and apparently having a great time!

This is a kitty we had recently taken in, so we had not yet learned all his quirks.  He arrived with the name "Waif," but nobody could remember that around here, so he started to be called "Tommy."  Well, after the light bulb mystery was solved, he got a new forever name:  Tesla! (For all you non-nerds, Nikola Tesla was a Serbian American scientist who discovered alternating electric current, among other things.)

As for safeguarding the light on Shabbos, we now loop the string around a nail up high on the wall so he can't reach it.  There's no rule against animals turning the light off on Shabbos, but we humans don't want to be left in the dark.  During the week, however, we leave the string down -- and at least once a day we catch Tesla pulling it on and off.  Then he gives us a look that is almost laughing.  Clearly he enjoys the game.

UPDATE 3/25/2016:  Last summer Tesla disappeared.  He went outside as usual, but never came home. Like so many of the stray cats we took in, he was a wanderer.  I hope that wherever he is now, he is happy.

Posted by Yonassan Gershom at 7:43 PM

I am very sad to report that Tesla disappeared about a month ago, and has not been seen since. I hope wherever he is --in body or spirit now -- he is happy.

I can say that for the two years or so he was with us, he was loved and cuddled and he gave us a lot of friendship.

He was not a cat to be kept indoors, he loved going outside, sitting in the sun and hunting rodents by the chicken coop. It is always hard when a cat disappears like that, but sometimes that is the price of giving them freedom. So this story is now a memorial to him.