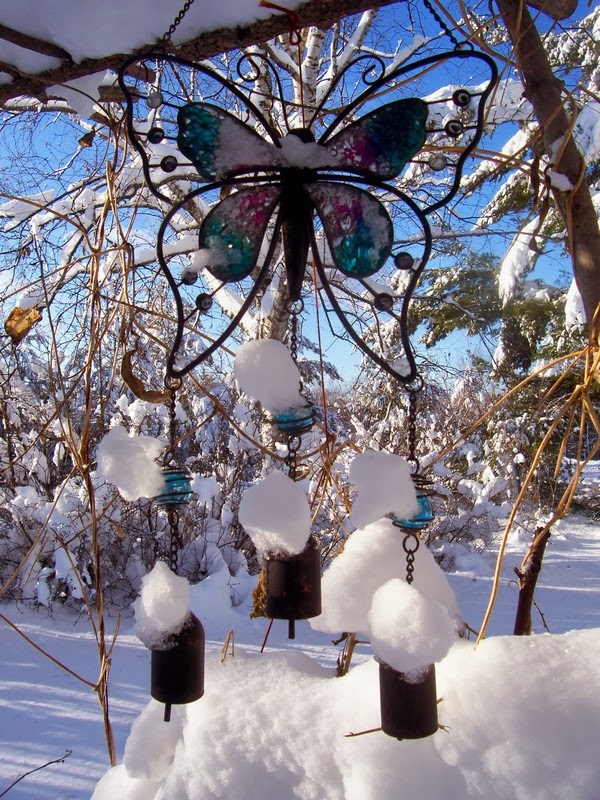 If you have been watching the weather on the news lately (and who hasn't?) you know that the upper Midwest has been going in and out of the arctic deep freeze for weeks.  Here in Minnesota we normally have cold winters, but even for us, it has been record-breaking.  Yesterday it was 20 below zero (F) at dawn, and it never got above zero all day.

The dogs went out, did their business, and came right back in within minutes, looking at me as if to say, "Do you really expect me to stay out in that?"  No, I don't.  All ten of our cats are in the house now, too, and showing no sign of wanting to go outside.  Who can blame them?  We are all beginning to feel that "snow" and "cold" really are four-letter words.

The chickens, geese and guineas are snug inside their coop, which I designed with a passive solar collector on the south side that helps keep their water liquid during the day.  Out of the wind with the sun shining in, the air inside is actually above freezing at noon.  Still, I have to go down there and empty all the waterers at sundown, or they will be frozen solid by morning.

Speaking of water, we have a shortage right now -- when it gets this cold, the plumbing freezes up.  Not enough to split the pipes, just enough to block water from getting from the well pump to the house upstairs.  It's an old house with an unheated basement and this is a recurring problem in the wintertime.

The pipes to the shower are in a outside wall, so we are just about guaranteed to have days with no water there -- meaning you try the faucets in the morning and take showers when the water flows.    This morning the shower was frozen but the sink was still running, so I washed up and did the dishes.  Three hours later, there was no water, period.  Hence the title of this post:  Melt Snow, Carry Water.

The snow we have is light and fluffy, which makes it easy to shovel but a lot of work to melt down, because it has less water content.  Since we live out in the country away from traffic and pollution, the snow is also clean, if I get it off the beaten track.  (The trails I've cleared to and from the buildings are being used by cats, dogs, rabbits, squirrels and an occasional deer, all of whom leave their calling cards behind. So you don't want that "yellow snow" from on the trail!)

I am finding that it takes about 5 times the snow to make one unit of water.  Luckily I have a lot of big pots and kettles from canning and pickling, so I fill these with snow, then haul them in on a sled.  To save propane, I let the pots just sit at room temperature until I need some water.  The snow packs down as it melts,  making slush that I can put in a smaller pot to warm as needed.  It's a lot of work, but we are surviving.  Snow might shut down Washington D.C., but here in Minnesota we know how to deal with the white stuff.  As the saying goes, what doesn't kill you makes you stronger.

The arctic blast a couple weeks ago lasted over 60 hours below zero.  It was during that cold spell that the engine of my car died when I tried to start it at 30 below.  The timing belt broke which, if you know cars, is major engine damage that I can't afford to fix right now.  so I'm stuck in the country without a car, relying on help from others to get things we need.  Still, I'm a lot better off than all those people who have no power or heat.

My ebay business,  The Happy Rooster, is suffering, though, because getting to the post office during business hours has been sporadic.  I posted a notice on the homepage and people have been very understanding about the delays.  Most of the orders have been for wildflower seeds, which nobody is planting now anyway.  But a lot of customers are "thinking spring" and planing their butterfly gardens.

In spite of all the hassles, the snow can be beautiful, and offers some interesting photographic opportunities.  Every other day we have been getting another inch or two, refreshing the landscape and adding to some interesting natural sculptures, like the "loaf of bread" below.  I take my cell phone along when I go out there, though, and I tell my wife where I'm going and when I expect to be back.  A fall or other mishap in this cold can be very dangerous.

That's all for now -- I've got to log off and go melt enough water to last me through the Sabbath (when we don't cook things) -- so stay warm, stay safe, and have faith:  Spring WILL come!  Shabbat Shalom!

Posted by Yonassan Gershom at 8:36 AM

10.20pm on a Saturday night 86 F and 61% humidity and hotter inside the house. Pitty we can't swap a few degrees. A breeze just felt so good. Take care

Winter hit like a brick wall here...a recurring brick wall. I am glad I heat with wood, but it is work! Glad your chickens have a good shelter.

Tony -- wish I could throw you a couple snowballs LOL!

Deb: It sure did hit like a brick. Found out that fixing my car would cost more that it is worth, so now I have to talk to the bank -- still owe money on the darn thing -- and see what I can do about getting another car. Unfortunately, insurance does not cover engine breakdowns.

Aside from that we are surviving OK -- Chris's grocery delivers here & I got a ride to the feed store last week. A lot of other things I can do by phone or online.

As a Norwegian I'm used to cold winters, though I have never needed to melt snow in order to get water. I do hope you will get running water back in your pipes again very soon!

Another thing, I have been thinking much about how totally dependent we are on electricity. To keep us warm in the winter and to keep us cool in the summer (if not by AC, at least by a fan). But for thousands of years people survived both in North America and North Europe, and other freezing cold places without it. Back then they didn't even have those warm houses like we have today. If it's true that only the strongest individuals have survived through history, most of us who are here today, should be able to manage the cold much better. Instead of being strong in the snow, it's like we act as a bunch of sissies. NOT YOU though! As late as last week I noticed a headline in a Norwegian newspaper; How To Manage The Snowfall. Geezzz...

Finally, let me say that I read all your posts here, and I find them both interesting and enlightening, and sometimes amusing. Keep up the good work!

Dear Rabbi Gershom, How good to hear you are not only surviving but prevailing with your snow know-how! We in Virginia have nothing like what you're dealing with in MN, but, unusually this year, we had two pretty big snowfalls, freezing temperatures, frozen chicken water bowls and a dead car battery. With all, the chickens are pretty cheerful. They even enjoy eating the snow and some of them like to bite the ice! Stay well! Karen Davis & United Poultry Concerns

Rita: Thanks for the suggestion about including both Fahrenheit and Centigrade --the local weather widget on the sidebar now has both, and I'll try to remember to do the same in future articles :)

UPDATE RE CAR: Found a 1994 Saturn I could afford -- manual transmission, which may be why it was cheap, since few people know how to drive them anymore. It's been a while since I drove a stick shift, but like riding a bicycle, it all comes back. It sure is good to have wheels again!

But we are still without water -- all that freeze-thaw-freeze finally did split a pipe -- the main one from the pump. Had water all over the basement. Turned off the whole system, have not gotten t fixed yet. What a winter this has been!

Sorry to come out of the blue, but I can't find any other place to write to you. Can you please recommend other CD's like Maramaros: The Lost Jewish Music of Transylvania (Audio CD) that you reviewed on Amazon? My mom needs them. Thank you!Thank you!Thank you!
:-) Springs a coming . . .
tonybruce165@yahoo.com