The stark silent beauty of winter

Last night (Saturday) I had to go out and shovel the huge pile of snow that the plow left at the end of the driveway.  Normally I would not be doing snow removal in the freezing cold of night, but﻿ my stepson needed a ride to work, so I had to pick him up and get him there by 7am this morning.  The snow came on the Sabbath (Friday sundown to after dark on Saturday) when I do not work, so I had no choice but to bundle up and go shovel last night.  And this brought me into a very beautiful nature experience.  The sky was clear, the moon and stars were out, the snow sparkled like diamonds, and the only sounds were an occasional car way off in the distance. Well worth braving the cold.  I only wish the sky had been that clear when we had the totla lunar eclipse back in December.

Now, I must admit that I'm not much of a winter person, but the snow does provide some wonderful opportunities for photography.  The pic below that I took in 2007 is called "Minnesota Snowscape."  (You are looking down the hill from the trail to my chicken coop.) 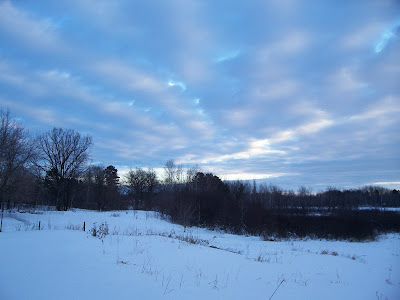 And this next pic is a view along the trail through our woods that I call "Dawn Wonderland."  This was taken a few years ago after a spring snowstorm, and is one of my alltime favorites.  You only get this "fairyland" effect when the snow is wet enough to stick to the trees -- and it only lasts until the sun gets high enough to hit the branches.  So I have to get up and out there at pre-dawn when there is some light but the sun itself is not up yet.  When I do manage that, I take all the pix I can before the show is over.  I rather like the blue color, too.  Once the sun is out, the snow becomes a glary white and loses this magical quality. 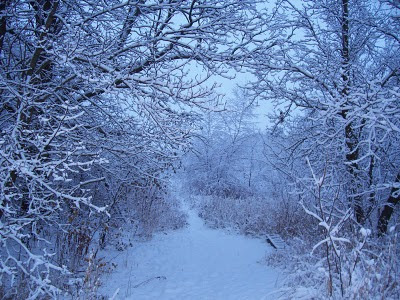 Posted by Yonassan Gershom at 9:12 AM

Lovely pictures. I like the first one best, with the rays of pink light reaching out. Also like your description of how things looked and felt while you were shoveling snow.