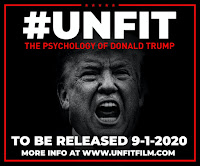 This EXCELLENT indie documentary, created by Doc Shop Productions in coordination with Duty to Warn (@duty2warn) and directed by multi-Emmy winner Dan Partland, is a must-see for anybody planning to vote in the November 3rd Presidential Election -- and that should be every voter in America.  Much has been said about Trump's erratic personality, but this film goes deeper.  As health care professionals, the psychiatrists and psychologists of  Duty to Warn believe it is their duty to warn the public about the dangers that a malignant narcissist like Donald Trump poses to society, and why he should be removed from office.
Not a political film per se, #UNFIT is science-based.  Rather than take stands on issues of policy, it explores the toxicity of Trump's personality and the dangers of having such a person in a position of power.  A malignant narcissist, according to Eric Fromm, has (at least) these four symptoms:
Narcissistic: totally wrapped up in him/herself
Paranoid:  suspicious of everyone, seeing conspiracies everywhere
Anti-social: lying, defrauding, manipulating other people with no remorse
Sadistic: Enjoying and/or inflicting pain of others
All of these behaviors are clearly evident in Donald Trump.  In the film, experts explain the Goldwater Rule, which states that mental health professionals should not diagnose public figures without actually meeting with them.  However, they make the point that the Goldwater Rule was never intended to be a gag order, and explain why this should be overridden in the Trump case by the "clear and present danger" to society. In such a case, it is their duty to warn.  Experts in the film also make the point that mental disorders are diagnosed by observing behaviors, and with all the hundreds of hours of Trump footage available, his behavior is clearly observable by everyone.
The style of the film is dynamic and fast-moving, with video clips, historical photos and animations interspersed with the usual talking heads.  (View the trailer here.)  As a contributor to the Kickstarter campaign that funded this project (making it completely independent of any other group or organization), I was privileged to view the pre-release.  I can wholeheartedly say this film ranks among the very best documentaries I have seen.  Five stars!
Release date:  September 1, 2020
Originally scheduled for a theater release, but plans changed with arrival of COVID19.  Instead, it will be available on demand on a wide variety of formats: Cable networks (Comcast, Spectrum, etc.), Satellite (DirectTV, DISH, etc.) and online streaming platforms (Prime Video, Apple TV, Google Play, etc.)  Which is probably better than a theater release anyway, making it possible to watch and discuss this film just about anywhere.  Rental cost is $5.99.  Check it out! 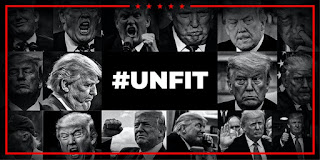 Posted by Yonassan Gershom at 2:31 PM

Dear Gershom (the best way to address you?),
You might remember me from some years ago when I wrote you after digesting your twin books on the Holocaust. You replied to me and somewhere I have your letter. I see myself as a strong example of a Jew(ess) who died under the Nazis in 1943-4 and was reincarnated as a male in the UK in 1948. Strong circumstantial evidence attends my own case, plus, I had experiences in this regard when under hypnotic regression, which was in 1991 onwards. I've just re-read your "Are Holocaust Victims Returning?" which I downloaded from you a few years ago. I mention this as the reason I am looking you up now.
OK, now that I've got that out of the way, I feel I have to comment on your article about Trump. There is no dispute that the man has major character defects, so your article has support from me. There is a big "However", however. The issue of Trump's handling of his life is to be subordinated to the greater issue of what would have happened if he had lost the election in 2016, or if that happens next month. The result of that in 2016 would have been for an infinitely worse character would have been President instead, and the US would almost certainly have become toast. And this will be the case if Trump loses next month. Whatever leaders the US (and UK) end up with, they are examples of king-sized defective human beings on a monotonous and seemingly interminable scale. But then, we as ordinary people probably deserve the leaders we get. A huge topic with a huge political dimension to it, so I'll stop there, except to say that if people knew what Hillary Clinton and Joe Biden stand for and what they have been involved in in their lives, they would hesitate before criticising the idea of the imperfect Donald Trump becoming POTUS and being re-elected to that post. I hope you are prospering in your own life, Gershom. I'd like you to know that one person I listen to regularly is Brother Nathanael Kapner.